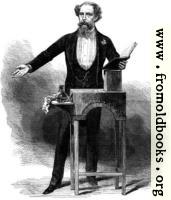 
The woodcut appeared in the Supplement, March 19, 1870 to the Illustrated London News. An accompaanying story noted that Mr. Charles Dickens had been giving public readings, but would no longer do so. He is depiected here as a bearded man standing at a desk, with one hand holding a book [...] [more...] [$] 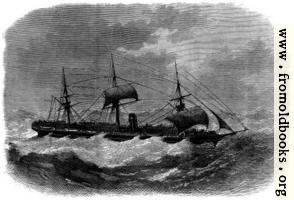 
Leaves from a Sketch-Book. YORK. The Engravings on this page are drawn from various sketches made some time ago in York and its neighbourhood. As their name implies, they are not intended to represent the architectural glories which are the pride of the great county of York, but have been hit off as taste or opportunity suggested—now from an old [...] [more...] [$]


“The gates, of which several remain in perfect preservation, and one of which, called the Micklegate Bar, forms the subject of our Engraving, are singularly imposing. The view is taken from the inside [i.e. inside the city walls], and shows the several flights of steps by which the path along the walls is reached, and from which a view over the surrounding country, as well as of the tall chimneys and busy fouondries immediately below, can be obtained. The fronts of these bars or gates, such as the Micklegate, the Monk’s bar, and the Walmgate Bar—the [...] [more...] [$] 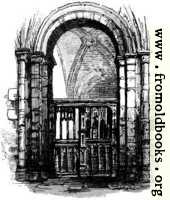 
“The Abbey of Selbey was founded by William the Conqueror, who richly endowed it, according to some because it was the place where Matilda of Flanders gave birth to Henry Beauclerc, while others state that this event was subsequent to the foundation. [...] It is in the Norman, the Early English, and the Decorated Styles [obviously only the Norman part [...] the central tower and mutliated south transept.” (p. 353) [more...] [$]


“The mountain horn, of wood, bound with brass, is nearly 8ft. long, and is one of those used by the Alpine herdsmen of Switzerland, and likewise in Sweden, to give signals to each other, or to call their cattle together, as well as to [...] [more...] [$] 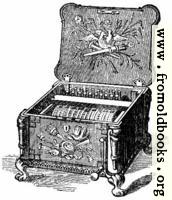 
“The serinette, or French bird-organ, was employed by ladies to teach airs to their little singing-birds, serins or finches; this one is of the seventeenth century, 11 in. by 8 in., made of beech-wood, veneered with satin-wood, and inlaid with marquetry of coloured woods [...] [more...] [$]


“The dulcimer is Italian, with twenty-six sets of metal strings, to be played with two little hammers.” (p. 368) [$]