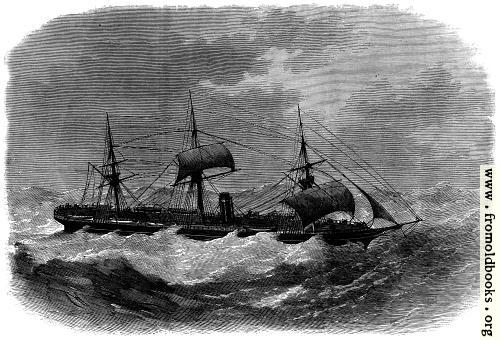 THE CITY OF BOSTON.

The fate of the Inman steamer City of Boston, which left the port of Halifax for Liverpool on Jan 28 [1870], has during the last two or three weeks been a subject of the most anxious solicitude. The missing steamer was built by Messrs. Todd and M‘Gregor, at Partick, near Glasgow, and was launched on Nov. 15, 1864.

She is a remarkably fine specimen of naval architecture, having, like the rest of the numerous fleet belonging to the Inman line, been built with especial care. She has always received the highest premium at Lloyd’s, and was ranked in the highest classification by the Association of Underwriters in Liverpool. In her general build and aspect the City of Boston bears a strong resemblance to the City of London, which, in speed, rivals the Cunard line. She is large, commodious, and handsome, and is propelled by engines of great power.” (p. 301)

The steamer never showed up; about 177 people were presumed dead.

Shipwrecks and Lost Treasures of the Seven Seas