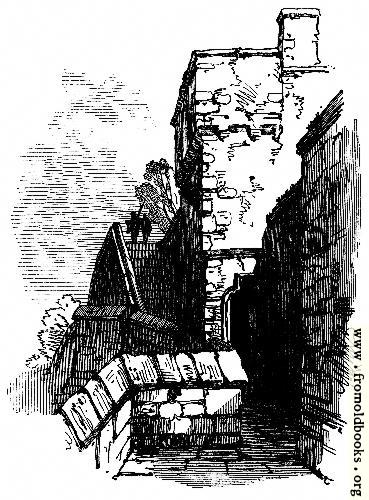 The gates, of which several remain in perfect preservation, and one of which, called the Micklegate Bar, forms the subject of our Engraving, are singularly imposing. The view is taken from the inside [i.e. inside the city walls], and shows the several flights of steps by which the path along the walls is reached, and from which a view over the surrounding country, as well as of the tall chimneys and busy fouondries immediately below, can be obtained. The fronts of these bars or gates, such as the Micklegate, the Monk’s bar, and the Walmgate Bar—the last of which still retains its barbican or projecting entrance—are grand and noble, and so well preserved that one is insensibly carried back some four or five centuries [from 1870] to the time when sombre broadcloth had not extinguished the taste for colour, and “motely was the only wear.” Then the gay pageant passed under the massive gateways in full holiday attire, as the gallant Edward III. led up to the Minster his young bride Philippa, fairest, gentlest, and bravest of all fair damsels in the days of chivalry, and “jousts and tounaments and songs and dances” lasted for weeks together, to do honour to the young wife.” (p. 354)