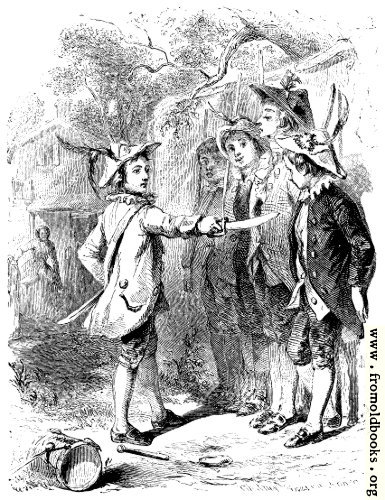 George Washington, as a boy, stands with a short toy sword and marshalls four other boys into a line as they pretend to be soldiers.

It was not to be wondered at that George, who had entered with great interest into all the preparations for his brother’s campaign, should share in the martial spirit of the hour. He never had cared for in-door sports; he loved to run and jump, and could throw a stone entirely across the wide river, which was a considerable feat for a man. But now all his amusements became of the military order. He cared no longer for tops, or marbles, or balls. He wanted all the boys to be soldiers, and he, of course, their captain. There he stood when play hour would come, with all the boys in Hobby’s school ranged along the wall, to be drilled and instructed in the new art of shouldering muskets and brandishing swords. A few paper hats and chicken feathers, with other impromptu finery that could be gathered up, answered for the uniform, while cornstalks furnished admirable muskets, and calabashes answered well for drums.

When these preliminaries were settled, the company was divided into two parts; one was to be the French, and the other the American army. George would always command the latter, while the biggest boy in the school, one William Bustle, was chosen to lead the enemy. Then they would march and countermarch, the rough wooden swords they had whittled for themselves brandished high in the air, with words of authority, just as if both the occasion and the armies were the most real in the world.

But when the sham fight began, and the cornstalks came into play with full fury, victory was sure to rest on the American side. He was George Washington even then, although but ten years old. (pp. 30 – 32)