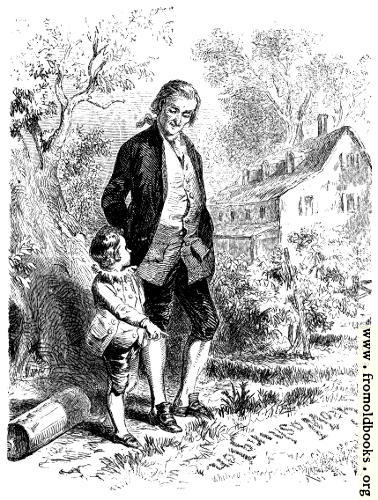 Washington and his Father, in Stafford County, Virginia, USA more

Washington and his Father

George Washington and his father:

With a view to George’s gratification and surprise, this good father once prepared a smooth bed in the garden, and had written thereon with the point of a sharp stick the name of his son. Then sowing along the little furrows some fine seed, it was once more smoothed over, and left for the rain and sun to produce the intended effect. In about ten days afterward, as George and his father were taking their usual walk around the well-known garden paths, they paused to gather the dark ripe gooseberries that were sure to occasion a little interruption at this point of the road, and as the boy reached over to gather the largest and ripest from the other side of the bush, he suddenly caught sight of the green letters, which now stood out distinctly on the smooth ground beyond the bushes. There they were, plain enough, to be sure— George Washington. Not a letter missing.

“Oh, look here papa!” he exclaimed, in an ecstasy of joy, as he beheld the strange and unexpected sight: “How did it happen that these leters should grow here to spell my name?”

“It is certainly a curious affiar,” replied his father, with mock gravity.

“But how did it happen, papa?” persisted the child, who had no idea that such things came by chance.

So his father explained to him how he had indeed sown the seeds in that form, but that his heavenly Father alone could cause them to sprout and grow: thus bringing a good lesson out of even this incident. (p. 26)