They Crossed the Delaware in Safetydetails 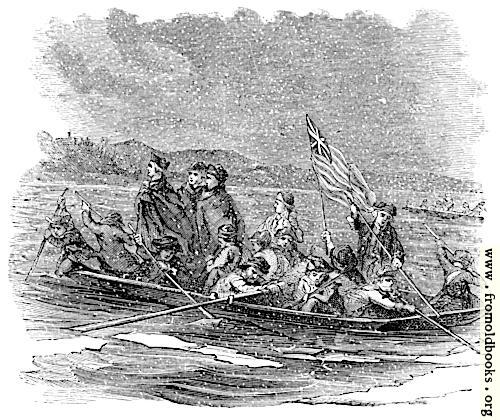 They Crossed the Delaware in Safety more

They Crossed the Delaware in Safety

The picture shows a boat of perhaps sixteen men in a small row-boat; George Washington stands near the stern looking behind anxiously for any sign of the British troops. Near the front, implausibly, someone is holding up a flag on a pole. The boat is crossing teh Delaware River in a snow-storm, and there are patches of ice on the surface of the water.

This retreat of the Americans across the Jerseys (as they were always called at that time), was a work of necessity; upon receiving a moderate re-enforcement, therefore, from Pennsylvania, Washington turned back to Princeton, intending to join Lord Stirling and General Greene, who were there with three thousand men; and here they would make a stand, if necessary.

But hardly had he reached there when the enemy was found to be approaching Princeton in trmemendous force, and well knowing that they would soon be surrounded and overpowered, Washington hastened back to Trenton, with the whole of the American troops, and, collecting every boat that could be had on such short notice, they crossed teh Delaware in safety, and reached the opposite shore just as Lord Cornwallis, with his great army, arrived at the river’s bank. Of course, the boars were all on the other side of the stream, and so could not avail the British much, and the floating ice made the crossing extremely difficult and dangerous, even with boats; their passage was, therefore, effectually stopped until the ice should become strong enough to admit of their marching over.