Ruins of St. John’s, from the Grosvenor Park,details 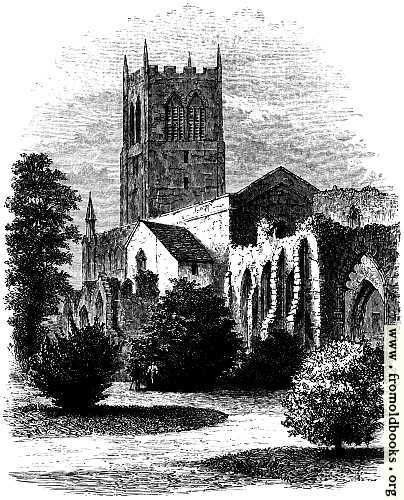 Ruins of St. John’s, from the Grosvenor Park,, in Chester, Cheshire, England more

Ruins of St. John’s, from the Grosvenor Park,

bwpics has a history and more pictures of this ruined church which was heavily ‘restored’ in the 19th century.

“[...] we find in St. John’s Church a permanent and very grand memorial of the Early Norman period [i.e. approx. 1070 – 1100 — Liam]. In Saxon times Chester was included, with all the extensive tract of Mercia, in the Diocese which acknowledged allegiance to the great see of St. Chad: but with the early Norman kings came a change that made Chester a definite centre of episcopal jurisdiction. [...]

“Chester [...] still retains, on the very edge of its historic river, a striking monument of its early diocesan dignity. The gigantic round Norman piers of the Nave stand just as they stood in the days of William Rufus; and the fine Triforium above belongs yo a period not much later; and though large portions of this structure have been destroyed, and though its partial restoration in modern times [1875] is unworthy of its ancient grandeur, yet in two respects this church cannot fail to make a great impression on all who see it.

“The ruins at the East-end, recently extricated from heaps of rubbish and the growth of trees, are now a recognised ornament of Chester, near the new park which is laid out on a table-land above the banks of the Dee; while the lofty tower, erect though mouldering, and still showing in parts some faint traces of its old enrichment, is conspicuous in every view of Chester, and rivals in its elevation the tower of the present Cathedral, which stands on the highest ground in the city.” (pp79, 80).