The River Dee: Its Aspect and History (page 2/3) 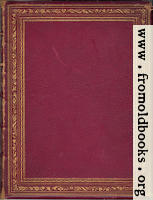 
My copy is bound in full read leather with a gold vine-leaf motif border. [$] 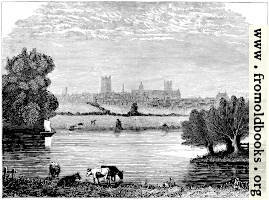 Chester, from the Alford Road.


Probably this view was drawn from the road between Chester and Aldford, as it’s written today, at the bank of the River Dee. [$] 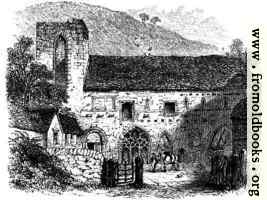 
“It was exactly in the year 1200 that Madoc, Lord of Bromfield, at the time when Prince Llewellyn was contending with King John, founded this monastic house in a deep hollow, already called the Valley of the Cross, from a monumental cross which stood there previously, and stands theire still [...] [more...] [$] 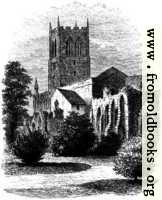 Ruins of St. John’s, from the Grosvenor Park,


bwpics has a history and more pictures of this ruined church which was heavily ‘restored’ in the 19th century. [more...] [$] 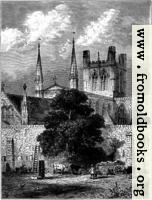 Cathedral from the N.E. and part of City Wall.


“[...] there is good reason to believe that during the Roman occupation of Chester, a church, dedicated to St. Peter and St. Paul, stood upon this spot; and most interesting it is thus to connect this ground with the early Christianity of the Apostles of the gentiles, so large a part of whose life was spent among Roman soldiers, and whose name must [...] [more...] [$] 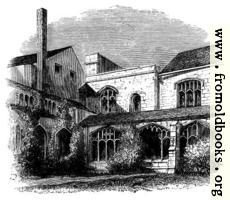 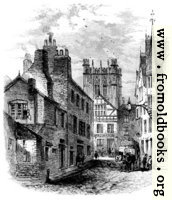 
A narrow cobbled street with black-and-white half-timbered buildings, an overhanging turret with a percariously-mounted lamp, a heavily-laden cart pulled by two horses, and in the background, with birds wheeling about it, the tower of Chester cathedral. Perhaps this street had [...] [more...] [$]


“The descent of Watergate Street, at right angles to Bridge Street, led to the [River] Dee at another point of its broad, sweeping course. Of the actual form of the gate there is less to be recorded; but a little beyond this spot the Water Tower (sometimes called the New Tower), remains at the north-western angle of the city, so as to show us very [...] [more...] [$] 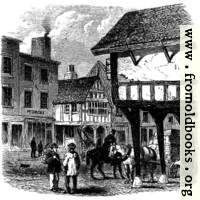 
“Turning now from the outside of the walls to the inside, we must remember that the four Roman Streets, intersecting one another at right angles, have always been the features which determined the whole interior character of the city. Only we must add to this fact that at the intersection was the “Hich Cross” itself—a structure of stone, which [...] [more...] [$]


This Victorian border, ornament or frieze is in the style of a frieze from a classical Greek temple, a style that was also imitated in Roman and (later) Egyptian decoration. It [...] [more...] [$]