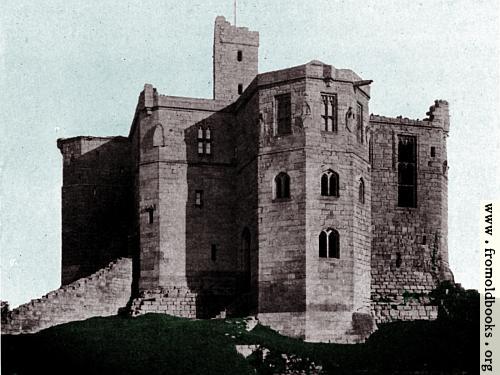 Version of Warwkworth Castle cropped, resized and hand-coloured by Liam Quin to make a computer background for your desktop (a wallpaper image).

I thought this looked like a nice imposing mediaeval castle (OK, medieval castle to people who spell differently) and yet is simple enough not to be too distracting. On the other hand, this is in border country, in the northernmost county of England before the Scottish border. The castle fell into ruin after the Roman Catholic Percy family fought alongside the Northern Earls against Queen Elizabeth I. In 1572 the 7th Earl of Warkworth was executed and the castle was ransacked by the Queen’s servants. After that it was no longer used, and fell to ruin.