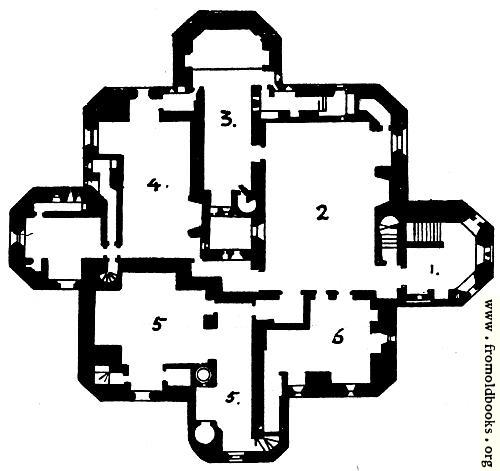 “[...] It has cellars and a great hall, with buttery and kitchens at one end, while from the other, access is obtained to the chapel and great chamber. On the same floor, occupying odd spaces where they could be contrived, are a few smaller rooms suitable for bedrooms.

Numerous small staircases, mostly circular, but some comprised of straight runs in the thickness of the walls, lead up and down in a bewildering fashion. In the centre of the building is an open shaft giving a modicum of light and air to the adjacent rooms. The whole building is a triumph of ingenuity, but a glance at the plan shows that the lighting must have been bad; the great hall, for instance, has only two windows on an outside wall (one being over the fireplace), and one, almost valueless, into the central shaft. It is not therefore surprising to find that after some thirty years had elapsed, a new great hall and kitchen were erected on another part of the castle close.

Most of these latter buildings have perished, but enough remains to show that this second hall had the large windows of the late Perpendicular period, and must consequently have been a far more cheerful apartment than anything in the keep.

The “worm-eaten hold of ragged stone,” as Rumour designates Warkworth Castle in the Second Part of [Shakespeare’s play] King Henry IV., hardly deserves that description so far as the keep is concerned, for the stonework is in a state of excellent preservation, and the lion of the Percies is still rampant in full vigour high up on the wing facing the town. The view (Fig. 45) indicates how careful the builders were to place no large windows near the grouond, while showing at the same time that they paid great attention to the appearance and careful execution of their design.

The side illustrated faces into the castle yard, where most secure from attack, and is more cheerfully lighted than those which face the town. It is obvious in all these illustrations of fifteenth-century buildings that the old haphazard methods are gradually giving way to a desire for more rhythmical arrangement.” (pp. 82ff)