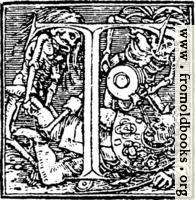 
This decorative initial letter “T”, or drop cap, is from an alphabet designed by Hans Holbein and dating from 1523. The skeleton figures in the alphabet represent death. The letter features a minstrel with his pipe, lying prostrate on the ground, and being dragged away by one Death, whilst another pours [...] [more...] [$] 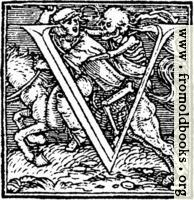 62v.—Initial capital letter “U” from Dance of Death Alphabet 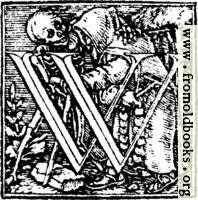 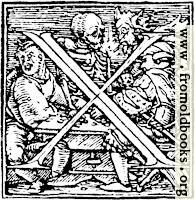 
This decorative initial letter “X”, or drop cap, is from an alphabet designed by Hans Holbein and dating from 1523. Death and the devil are hanging out around the gamblers. [more...] [$] 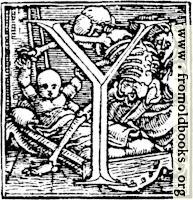 
This decorative initial letter “Y”, or drop cap, is from an alphabet designed by Hans Holbein and dating from 1523. [more...] [$] 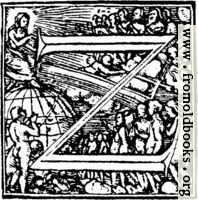 
This decorative initial letter “Z”, or drop cap, is from an alphabet designed by Hans Holbein and dating from 1523. Appropriately for the end of the alphabet, this drop cap Z shows the end of the world and the bodily [...] [more...] [$]


This image is the title page of a book by John Lonicerus listing things that Augustin Alveld said or wrote about Martin Luther. Got that? Good! [more...] [$]


This picture shows two young men working an early hand-operated printing-press. The nearer man is pulling the bar that turns the pole with a screw-thread which in turn presses down on the platen and forces the paper (not visible) into the inked type (also not visible, because it’s under the paper that’s in the press). The curly-haired young man or [...] [more...] [$]


This part of the Sixteenth-Century border-image woodcut by Lucas Cranach the elder shows a man holding a large wineglass, holding a large tankard, with perhaps a barrel under his arm. He is crowned with flowers and his head is surrounded by bees. He is dressed in tatty rags, his leggings have holes at the knees and torn cuffs at the ankles, and his [...] [more...] [$]


The captions are in German, and I cannot understand them. If you want to send them to me (UTF-8 please!) I’ll put the transcriptions up on the pages for the corresponding plates. [more...] [$]