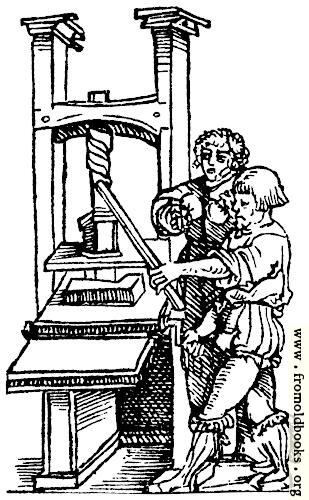 This picture shows two young men working an early hand-operated printing-press. The nearer man is pulling the bar that turns the pole with a screw-thread which in turn presses down on the platen and forces the paper (not visible) into the inked type (also not visible, because it’s under the paper that’s in the press). The curly-haired young man or boy behind him is holding two leather or cloth balls which will be soaked in ink; he’s ready to run them over the type in preparation for printing the next page. The inker was poularly called the printer’s devil, partly because they often got blank ink on their faces and partly because the inker of Aldus Manutius, one of the first printers, was a negro slave-boy.

Link to the full border

An 1812 biography of Aldus Manutius

Printer’s Devil in Brewer’s Dictionary of Phrase and Fable