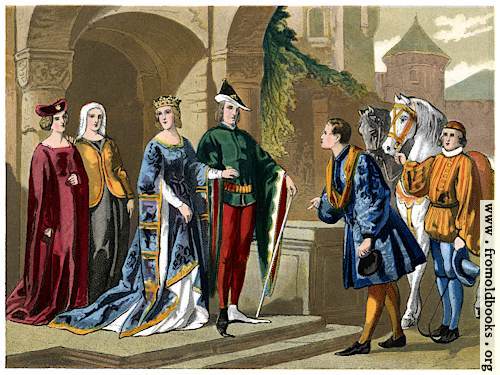 The coloured plate apears to be showing a queen, in blue satin with gold, accompanied by a young man who might be her consort and who is holding her hand, but who is on her left-hand side. Behind the wheen are two women, and in front two men, one bowing, the other holding one of two horses; perhaps the queen is going on a jounrey but one has to imagine that there will be a carriage, for surely she is not equipped for riding?

The tight sleeves of the preceding reigns were now out of fashion; and the monk of Evesham speaks of the deep wide sleeves, commonly called “pokys,” shaped like a bagpipe, and worn indifferently by servants as well as masters. “They were denominated,” he says, “the devil’s receptacles, for whatever could be stolen was popped into them. Some were so long and so wide that they reached to the feet, others to the knees, and were full of slits.” As the servants were bringing up pottage, sauces, &c., their sleeves “would go into them, and have the first taste; and all that they could procure was meant to clothe their incurable carcasses with those ‘pokys’ or sleeves, while the rest of their habit was short.”

The clergy, Knyghton says, were not to be known from the laity; and the ploughman in the “Canterbury Tales” rails at them for riding glittering with gold upon high horses, “gayer than any common knight might go, wearing golden girdles and gowns of scarlet and green, ornamented with cutwork, and the long piked shoes, nay being armed even like men of war, with broad bucklers and long swords and baldricks, with keen basilards or daggers.” “Many priests,” he says, “have mitres embellished with pearls, like the head of a queen, and a staff of gold set with jewels.” In addition to this Chaucer has introduced a monk amongst his pilgrims dressed in open defiance of regulations of the church. The sleeves of his tunic are edged with the fur de gris, “the finest in the land.” His hood is fastened beneath his chin with a golden pin, curiously wrought, the great end being fashioned like a true-lover’s knot, or having one engraved on it. His supple boots and the bells upon his horse’s bridle are mentioned as instances of his foppery and love of display. Even the parish-clerk, described by the miller, is said to be spruce and foppish in his dress. His hose were red, his kirtle sky-blue, set about with many points, and over it a surplice white as a blossom. His shoes had “Paules windows carven” on them—that is, they were cut or embroidered lattice-wise, a fashion more or less prevalent during the thirteenth and fourteenth centuries.

The female costume was equally splendid ad fantastic. The parti-coloured dresses of the previous reigns were still in vogue, with numerous varities of the “cote-hardie,” the waistcoat or spencer-like vest formerly described, some of them probably Bohemian fashions introduced by Queen Anne.

The upper classes of society has become shamefully corrupt, and showed no feeling of sympathy for the sufferings of the poor, who were exposed to great oppression. (p. 755)