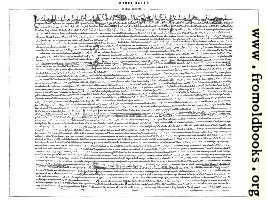 
Magna Carta wasn’t as big of a deal at the time (it only lasted a few months) as it is seen today, but it did lay the way for other treaties, and limited the power of the monarch and nobles (the government officials of the day) when they conflicted with the [...] [more...] [$]


King John sits on a throne under a huge canopy and raised up on a daïs, a large scroll in front of him which is presumably the original copy of the Magna Carta itself. He is about to press a seal into [...] [more...] [$] 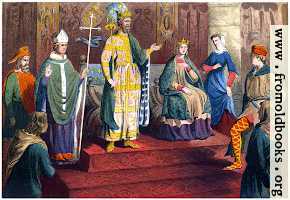 
A group of eight people stand on and around a red-carpeted raised platform or daïs, with a background of curtains or tapestries and a stone column. The king stands in front of his throne; the queen to his left is seated. The bishop stands wearing robes and miter and holding a tall cross, although not a hooked crozier. The others stand around in various [...] [more...] [$]


The King here is taken from the coloured plate Costumes A.D. 1200 – 1300; he is standing, wearing a golden crown and a pink robe with gold embroidery of solid lines and the fleur-de-lys and cross; over his shoulder is a green cape with a blue and white lining bearing an heraldic theme; on his feet are diamons-pattened yellow pointed shoes that might really just be little more substantial than socks; in his right hand he [...] [more...] [$] 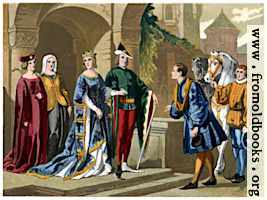 
The coloured plate apears to be showing a queen, in blue satin with gold, accompanied by a young man who might be her consort and who is holding her hand, but who is on her left-hand side. Behind the wheen are two women, and in front two men, one bowing, the other holding one of two horses; perhaps the queen is going on a jounrey but one has to imagine [...] [more...] [$]


This steel-engraved border is made up of twigs which divide the page into four areas. [more...] [$]


Full-page border of twigs; this is a single version of the four-way rustic border that does not divide the page into four. [more...] [$] 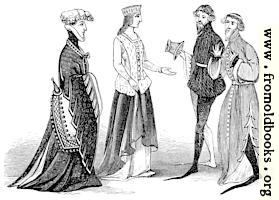 
King Richard II of England reigned from 1377 to 1399. So this picture shows people dressed for court in the end of the fourteenth century. [more...] [$] 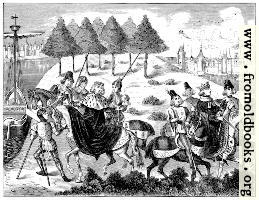 Arrest of the Duke of Gloucester


On a grassy knoll, with trees, outside a castle, the King’s soldiers arrest the Duke of Gloucester on his horse. You can tell the King on the right by his crown and the royal coat of arms just visible on his horse’s caparison; the duke of Gloucester is identified by his robe, which is drawn using the heraldic convention for ermine. A boat is parked [...] [more...] [$]