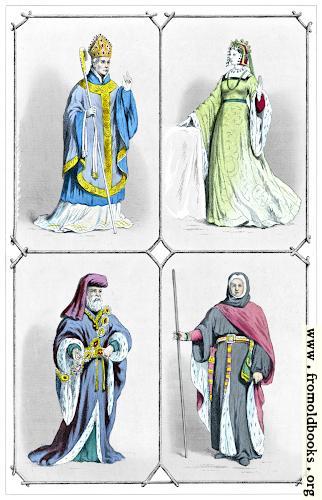 Richard the Second was perhaps the greatest fop of the day. He had a coat estimated at thirty thousand marks the, value of which must have arisen chiefly from the number of precious stones with which it was embroidered. This fashion prevailed during the fourteenth century, as did that of working letters and mottoes on the dress, and cutting the edges of the mantles into the shape of leaves and other devices. The curious and authentic portrait of Richard, preserved in the Jerusalem Chamber at Westminster Abbey, represents him in a robe embroidered all over with roses and the initial letter of his name; and the effigies of Richard and his Queen Anne, on their monument in Westminster Abbey, present splendid specimens of embroidered garments. A few sumptuary laws were enacted during this reign, but they were little attended to, and extravagance of every description was universally indulged in. (p. 754)