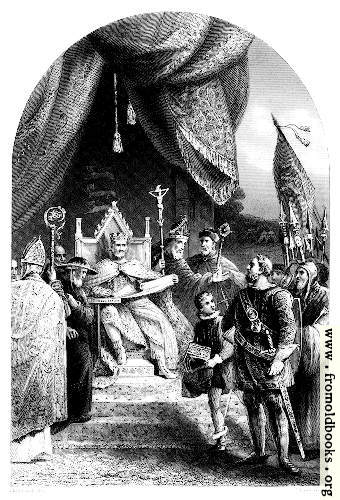 King John sits on a throne under a huge canopy and raised up on a daïs, a large scroll in front of him which is presumably the original copy of the Magna Carta itself. He is about to press a seal into hot wax. He looks grumpy, unhappy, as well he might.

Though the name of Runnemead is usually connected with that of Magna Carta, it is supposed that only the baronial army was encamped upon it and that the king and the principal parties to the covenant on both sides, withdrew to a small island, where it was actually concluded. This spot is still called Magna Carta Island, and stands in the Thames, not far beyond Ankerwyke [Ankerwick] in Buckinghamshire, to which there is a ferry from it for foot-passengers. The ferry-keeper’s house stands on the island, almost hidden by the osiers with which it is covered. At Ankerwyke there stands a venerable yew-tree, whose gnarled trunk is probably of an age greater even than that of the discoloured parchments now preserved with religious care among the national archives. (p. 339)