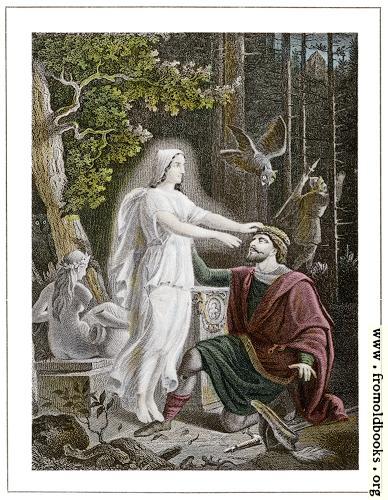 A ghostly woman glowing white floats in the air, her bare feet not touching the ground, as she reaches out to a knight, kneeling in awestruck adoration. In the background a statue of the same woman atop a tomb, and owls flying in a forest; ws see also the servant running away through the trees at midnight.

Sir Burkhardt Kellr, one of the nobleknights of the court of the widowed Margavine of “Hohenbaden” used to ride, almost daily, into the Murg valley in order to visit the lovely daughter of the Castellan of Kuppenheim.

One his way home through the woods at midnight, he suddenly saw a most beautiful woman before him.

Shortly after he learnt that in olden times a heathen temple had stood on that very spot.

Spurred by curiosity, he tried to find out the truth of that report by excavating the ground, and succeeded in unearthing a snow-white marble statue of a woman bearing exactly the same features of his midnight vision. Her lovliness set the knight’s heart aflame with love, and he could hardly tear himself away, half expecting a repetition of his previous vision.

Once his faithful servant followed him to find out where he was going to every night, and to his great horror, saw him kneeling before the statue who was descending from her pedestal, putting her arms round the knight’s neck and kissing him.

In great alarm the man rushed away for assistance, but on their return found Burkhardt Keller dead at the foot of the statue. (p. 8)