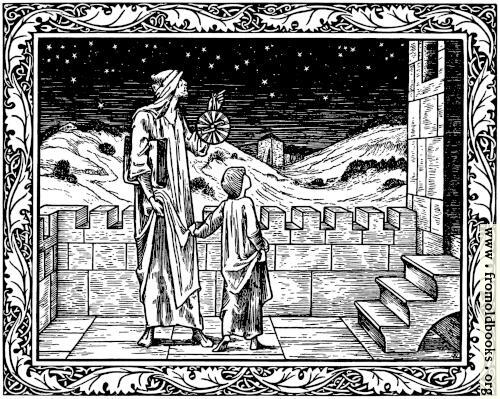 This illustration, surrounded by a leafy border inspired by medieval and early printed books, shows a man holding a robe and with sixteenth-century or earlier style courtly footwear and hat, standing on the balcony of a castle at night, with a starry sky visible, holding up an astrolabe, while next to him stands a boy also wearing a long robe, and barefoot or with similar soft-soled shoes to the older man, gazing upwards, wondering why image descriptions always seem to have really long sentences. The image was used at the start of the prologue to the description of the astrolabe, made by Chaucer for his ten-year-old son Lewis, or by the son’s tutor, who may have been Ralph or Nicholas Strode or Merton College Oxford, although Chalmers in his Biography doubts this.

The castle may be intended to be Donnington Castle, although Chaucer’s son Thomas did not buy that castle until several years after the Astrolabe treatise was published. But William Morris, republishing, may not have known that.