Two of the revellers in Irish peasant costumedetails 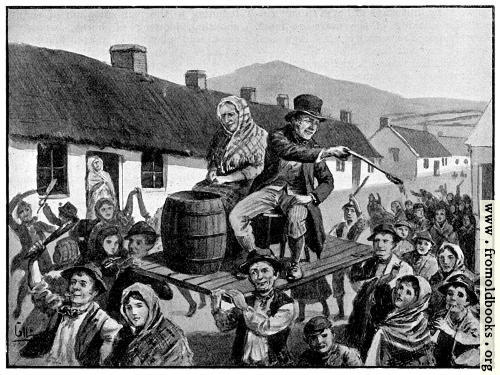 Two of the revellers in Irish peasant costume, in County Cork, Ireland more

Two of the revellers in Irish peasant costume

Two of the revellers were dressed up to represent an old man and woman in Irish peasant costume. From a great pot in front of them they ladled out boiling tar!

A man and a woman in traditional Irish country dress are seated on two chairs, in turn placed on an old door and carried on the shoulders by a man at each corner; there is an oak barrel on the door, and the man in his top hat is flinging hot tar from it at the crowd using a long ladle or spoon. They are passing a row of thatched cottages.

The book says the tar is boiling, but of course without a fire it would cool down pretty fast. They are celebrating Shrove Tuesday, the lsat Tuesday before Lent, although today Saint Patrick’s Day celebrations seem more likely.

In some parts of the County Cork there was an odd custom [on Shrove Tuesday] of dressing up two of the revellers to represent a old man and woman, in the old-fashioned costume of the Irish peasant, the man wearing the coarse frieze coat and knee-breeches, tall hat, long grey stockings, and buckled shoes; the woman arrayed in short skirt of serge or linsey, lilac apron, hood cloak, and white-frilled cap, with stiff-starched frills, a gay little shawl or handkerchief folded over her head. They were seated on two chairs or stools, fastened upon a door, with a great pot or cask of boiling tar in front of them, from which they ladled out spoonfuls, often flinging he liquid on the clothes of the crowd, as they were borne unsteadily through the streets, shouting, singing, and joking in a very boisterous fahion. Nobody seems able to explain the custom—perhaps it was an Irish version of “King Carnival”—but during the last few years [1904/5] it seems to have completely died out, though the young men and boys in these districts still march through the streets, singing, shouting, and playing noisy music, and amusing themselves with all kinds of rough practical jokes, among which breaking lamps and wrenching off [door-]knockers occasionally figure. (p. 460)