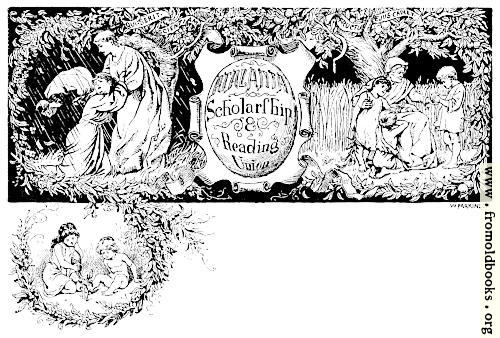 This chapter head illustration features a central shield in a scrollwork cartouche bearing the title. On the left a woman gives succor to a youth or maid in distress, a scene in a rainstorm in a forest; on the right in the same forest an older woman sits with apples in her lap and a knife to pare or peel them in her hand; she gives the fruit to three barefoot children around her. Beneath, a small girl pours liquid (presumably water) from a ewer onto the ground, watering a plant, while an infant boy, naked, looks on. A scroll near the top bears the Latin phrase Qui serat scientam fructus juis capiet (those who sow knowledge capture its fruit)

Underneath is printed a quotation:

Wisdom consisteth not in knowing many things, nor even in knowing them thoroughly; but in choosing and in following what conduces the most certainly to our lasting happiness and true glory.

The quote is attributed to Waltar Savage Landor and comes from “Imaginary Conversations” between Lord Bacon and Richard Hooker.

The illustration is signed W. Parkinson.

Atalanta Magazine was aimed at girls, and ran a competition each year. The first prize in the 1887/1888 competition was an annual scholarship worth £30 for three years, won by Florence Mary Wilson of London, with a £15 second prize going to Mabel A. Brackenbury, also of London, and a third prize of books to the value of £5, a large sum of money in 1889, divided between two winners.