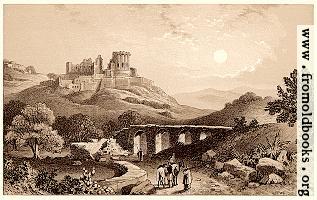 The site of this celebrated capital is delightful, by universal consent. It is a very large isolated hill, rising by successive terraces at least six hundred feet above the valleys which surround it. In shape it is oval, and the smaller and lower end unites it to the neighboring mountain on the east. There is no fountain on the hill, and during a siege the inhabitants must have depended entirely upon cisterns. Water, however, is abundant in the neighborhood. There is a good spring a short distance below to the south-east, and a brook from the mountains in the same direction, large enough to drive a mill; and in winter a fine mill-stream also flows past the north side of the hill. All these unite at the bottom of the plain northwest of the city, and, as I am told, form part of the river which, at the sea south of Cæsarea, is called Abu Zabûra.

The view from the topmost terrace of Samaria over the rich plains and hills around it, and far away to the blue Mediterranean, is truly magnificent. The remains of the ancient city consist mainly of colonnades, which certainly date back to the time of the Herods, and perhaps many of the columns are much older. There is a group of sixteen standing in a recess low down on the north-east side of the hill, and a similar group of sixteen on the top, though these last are larger; and there are many lying prostrate. The grand colonnade, however, runs along the south side of the hill, down a broad terrace, which descends rapidly toward the present village. The number of columns, whole or broken, along this line is nearly one hundred, and many others lie scattered about on lower terraces. They are of various sizes, and quite irregularly arranged, but when perfect it must have been a splendid colonnade. The entire hill is covered with rubbish, indicating the existence and repeated destruction of a large city. The modern village is on the south-eastern slope, adjacent to the ruined church of St. John. You have seen so many views of what these ruins are not that I despair of giving an accurate idea of what they are. The church, however, is an interesting specimen of mediæval architecture, which all look at with respect, and many with deep emotion. This is natural; though the tradition that associates the martyrdom of the Baptist with this spot is sufficiently doubtful, yet it augments the reverence with which one explores the vaults of this fine old ruin. (p. 468)