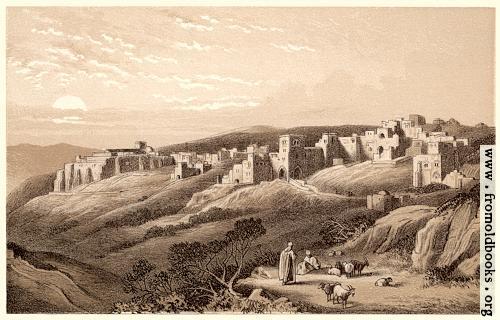 In the foregrouns are two men, ora man and a boy herding goats. But behind them rise hills and the small ancient town of Bethlehem , with its square buildings and its temple.

The houes in ancient Palestine were divided into a lower part and an upper part, with a simple mud roof on top. The family slept in the upper part, which was a simple raised platform at one end of the building. The lower part, with a dirt floor, was used for livestock. The Biblical account of Jesus born in the stable because there was no room in the Inn should rather read, Jesus was born in the lower part of the house because the platform was too full.

Bethlehem (has the book notes) was the birth-place of King David, which is why the Gospels to go so much trouble to invent a reason for Jesus to have been born there, along with their contradictory genealogies.