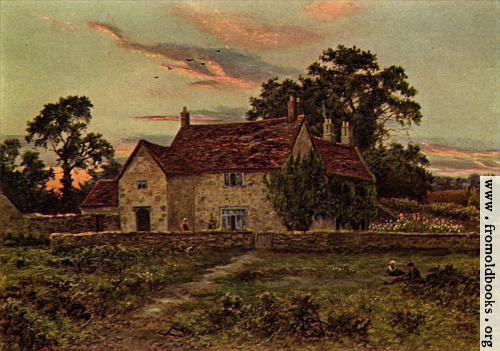 Sulgrave Manor, The Cradle of the Washingtons.
Painted especially for the author by Daniel Sherrin.

The printing quality was rather poor, unfortunately, so this image is included more because it might interest Americans and historians than for any other reason.

Of the many thousands of Americans who throng to Stratford every year, perhaps only a small number are aware that the ancestral homes of the Washingtons are only a few miles away. Still smaller is the number who make a pilgrimage to Sulgrave or to Brighton, ten miles farther, though the memories and traditions of these places are so closely connected with the ancestors of the Father of His Country. True, his stately home by the Potomac is not neglected by his countrymen, but every American should be deeply interested in the English forefathers of the man who more than any other freed them from the “rule of kings.” ” (p. 40)

“Very faithful in detail and sentiment is Mr Sherrin’s picture, painted at my request—the artist gaining his inspiration by a week under the old roof while employed in his task. The picture shows the old house much as we saw it, standing against a rich sunset sky, its harsh outlines softened by a little distance.” (p. 43)