A greenish blue cover with gold foil lettering and a black drawing of a castle. [$] 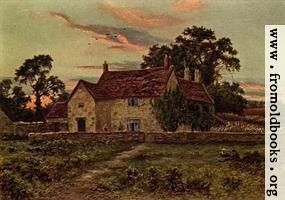 
Sulgrave Manor, The Cradle of the Washingtons.
Painted especially for the author by Daniel Sherrin. [more...] [$] 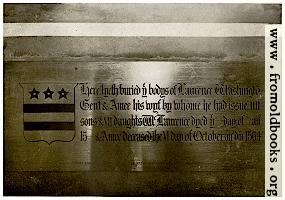 
We followed the rough cobblestone walk to the church door, but could not gain admittance until the caretaker was found, for Sulgrave Church has been kept strictly under lock and key ever since one of the Washington brasses was stolen—by an American, of course—a few years ago. It is a small, rough, lichen-covered building, much restored, even to [...] [more...] [$] 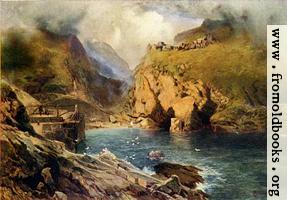 
“After we reached the hotel, the long twilight still gave time to contemplate the weird beauty of the surroundings and to explore the ruins of the castle so famed in song and story. We scrambled down the high headland, upon which the hotel stands, to [...] such a masterly manner in the painting by Mr. Moran, the towering cliffs crowned by the fragmentary ruins looming far above us. A path cut in the edge of the cliff leads to a precarious-looking foot-bridge across the chasm and a still narrower and steeper path hugs the face of the precipice on the opposite side until a heavy oaken door is reached. This door, to which the old caretaker in the cottage below had given me the key, opens into the supposed site of King Arthur’s castle. Only a few scattered bits of masonry remain and these are probably of a later time than that of the early Briton. [more...] [$] 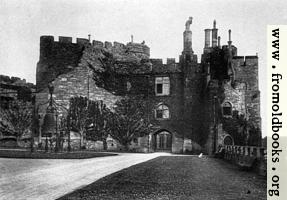 
“There are few English castles where the spirit of medievalism lingers as at Berkeley and few that have darker deeds recorded in their long annals of crime. [...] The castle, grim, many-towered, ivy-clad, the very embodiment of the days of chivalry, still lingers in memory, with [...] [more...] [$]


“For ten miles from Newport we wend our way over a dusty, ill-kept byroad with sharp turns and steep grades, and before we come to the village we see from some distance the broken towers and battlements of Caerphilly Castle. We pass through the gateway in the straggling walls and the scene of desolation and massive ruin that lies before us is hardly paralleled in impressiveness among British castles,unless it by by Corfe in Dorset. A great [...] [more...] [$]


“Near the cross, relics of days when there were rogues in Ripple—sureley there are none now—are the oaken stocks and weather-beaten whipping-post.” (p. 132) [more...] [$] 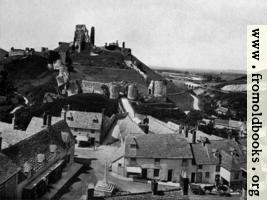 
There has been a castle on this site for well over a thousand years. The buildings there now were started in the 11th century, but were slighted (made insignificant, or at least indefensible) after the English Civil War, probably in 1646. Even as a [...] [more...] [$] 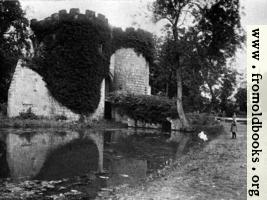 
This is a version of Whittington Castle resized and cropped so it fits on most computer desktops. [more...] [$] 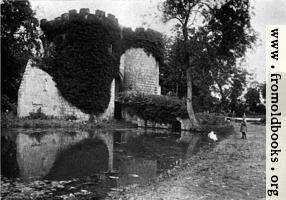 
There was a castle here over a thousand years ago, but the current buildings probably date from the 1200s and later. [more...] [$]