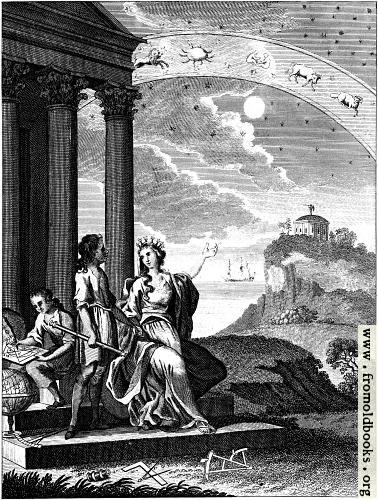 The engraving opposite the title page of this erly 19th century (1806) book on Astrology clearly tries to place a Biblical and Christian veneer over the proceedings. It falls perhaps a little wide of the mark by showing people in what appears to be a Greek (pre-Christian) temple, one of whom plots a chart, another, a young man wearing a tunic, carried a telescope, and the third, a woman with a long robe and a tiara or crown, gestures at the heavens with one hand. In the background another temple, a ship, and in the sky the sun, moon, stars and the circle of the zodiac. In the foreground, drawing instruments including a sextant.

A caption engraved under the plate reads: “I consider the Heavens the work of they fingers the Moon & the Stars which thou hast ordained. Psal. VIII. 3.
They fought from Heaven the Stars in their courses fought against Sisera. Judges V. 20.”

This engraving is too large and finely detailed to reproduce well at low resolutions. I can send the raw GIMP files on request.