Paul and Virginia in the Forestdetails 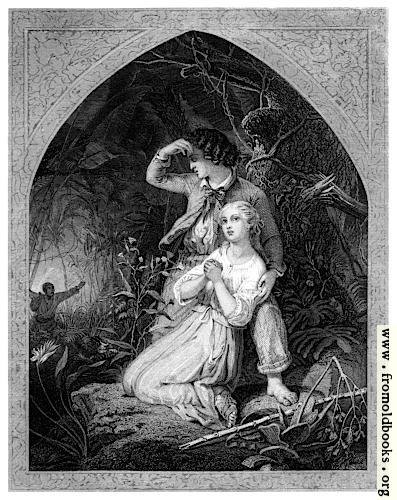 Paul and Virginia in the Forest, in Mauritania more

Paul and Virginia in the Forest

This engraving by A. L. Dick is of a painting by Frédéric Henri Schopin; the original painting was one of four made to illustrate a tragic novel, Paul and Virginia (Paul et Verginie), by Jacques-Henri Bernardin of Saint-Pierre, set in Mauritania. It’s possible that the painting used for this engraving was actually a later copy, and not very accurate, as claimed in French above, at the only place where I found this exact picture, Peintures des lointains. The book containing this engraving said that the artist had not painted anything for a long time.

The novel itself was immensely popular in France, and contained biting social commentary. The idea of living barefoot also amused some people both at the time and later.

I also made the arched border available as a separate image.