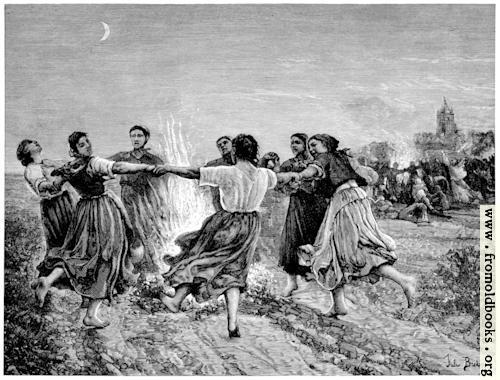 (From the original painting by Jules Breton.)

A ring of seven barefoot women dance with arms linked around a fire in an open field; there is another group dancing in the background and, beyond that, the outline of a church or cathedral. There’s also a man seated by the distant group. In the original painting a man holds up a flaming torch near the foreground circle, shod, but he is omitted from this engraving. In addition the background in the painting is of cottages, not a cathedral.

Note: the engraving here based on the painting La Fête de la Saint-Jean (the Feast of St. John) by Jules Breton. The engraver is not identified in the book.

A curious custom prevalent in Ireland and the west coast of France and Portugal, is the custom illustrated in the Eve of St. John’s Day. It may have originally been connectred with the Druidical rites of Midsummer night, 22d of June, (being on the 27th June, 5 days later) the custom is so old that the oorigin is lost in obscurity. The dance is only of maidens, and none but maidens dare join in the dance—so the superstition runs. (p. 238)