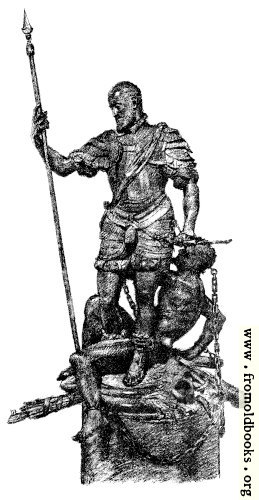 This is an engraving of a charcoal drawing made by C. Molony after the bronze statue of Leone Léoni depicting Charles (Carlos) V, Holy Roman Emperor, and the fury—the chained, naked man at his feet—which represents the recently-conquored country of Germany. In the original statue from the sixteenth century, now at the Museum of Prado in Madrid, the armour is removable, so that the emperor can be shown nude, as a god.

There is a description of the status at the Web site for the museum, Emperor Carlos V and the Fury.