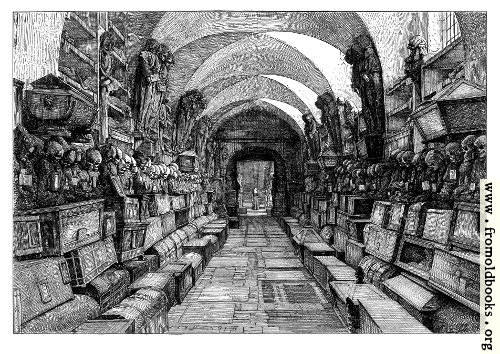 The Catacombs at Palermo, in Palermo, Sicily, Italy more

The Catacombs at Palermo

At the end of a long dark corridor, lined with coffins, chests, skulls, and the standing dead, we see an archway, and, through the arch, an old man, a monk, standing in a pool of light. This is a very cinematic engraving, even though it predates cinema, and perhaps is a little dark even for Halloween.

Near La Zisa [near Palermo in Italy] is the Monastery of Cappuccini (now [1870s] converted into barracks), in the Catacombs of which the rich people of Palermo deposit their dead. For some months the dead are placed in dry earth, perhaps mixed with lime; at the end of that time they are taken up, and dressed in the clothes which they wore during their lifetime, and are then either put in a wooden coffer and deposited in the Catacombs, or are placed in a standing position against the walls. The long corridors of the Catacombs are thickly lined with these miserable relics of mortality, which look down upon you from the upper walls, t o which they are fastened, in a horrible fashion. Each one bears in his hand a placard, setting forth his name, age, and date of death. Some hold in their hands a photograph of themselves, taken when they were full of life and health.

One more word aout these horrors, and we have dine. On a certain occasion some men were carrying a corpse to its assigned position in the vaults. They had descended the steps, and were proceeding through one of the long corridors, when they suddenly observed a skull move t othe edge of one of the shelves, and roll off on to the floor; again it began to move, and the men, thoroughly frightened, threw down the coffin, and rushed upstairs as fast as their legs could carry them. Having told their story of the animated skull, a number of people determined to see the phenomenon, andhaving arrested the motion of the still moving skull, they found a rat inside it. (p. 196)