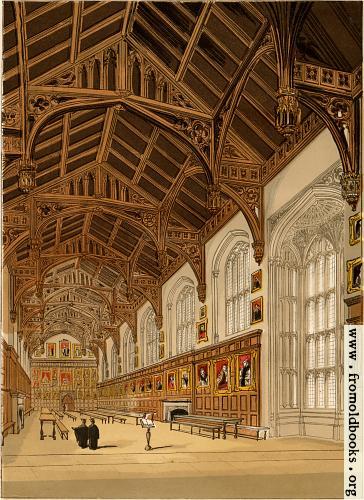 Christchurch, you have no doubt heard, is the richest, most magnificent, and most celebrated of all the collegiate establishments of Oxford. It is the especial resort of the sons of the richest gentry and higher aristocracy of England. Kohl reminds is that Sir Robert Peel was educated here. It has been honoured by hosts of men who have belonged to a different aristocracy,—men who are seldom acknowledged to be illustrious during their lives, but whom none deny to be so for every afterwards. Sydney, Ben Jonson, Otway, Locke, Penn, and Canning, were all members of Christ’s. [Note: I have linked these to the Nuttall Encyclopædia, I hope correctly! Liam] The founder was Wolsey; and every thing one sees here harmonises with the associations suggested by his name, although his scheme was [only] in part accomplished.” (p. 291)