The Standard of the White Horsedetails 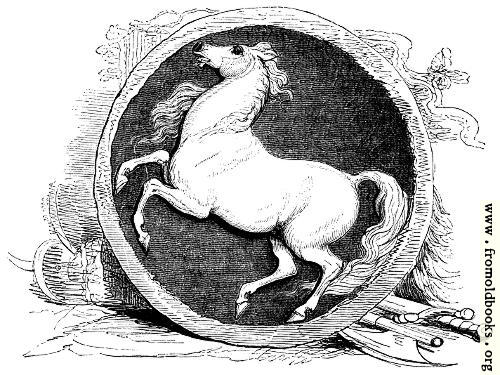 The Standard of the White Horse more

The Standard of the White Horse

A white horse rears up; it is set in a circular frame or cartouche with sword-hilts and an axe-head nearby.

The White Horse was made by cutting away the grass on the side of a hill in the shape of a horse, and letting the white chalk show through; it is not Anglo-Saxon, as incorrectly suggested in the following abstract, but dates from 1,000BC (give or take some 400 years), and the coins with the same horse symbol on them are from the Iron Age, long before the Romans arrived in Britain. The picture here looks nothing like the White Horse of Uffington; the suggestion is that the Anglo-Saxons used a banner of a white horse in battle. I have therefore not marked it as depicting a location.

There is a very remarkable object in Berkshire, not a great distance from , the birth-place of , which has been considered a memorial of the bravery and patriotism which he displayed even before he came to the throne. In the reign of the First, the brother of Alfred, the Danes, who had invaded , were routed with great slaughter in a battle known as that of (Ash-tree Hill); and it was contended by Dr. Wise, a learned antiquary of the last century, that the ridge of chalk hills extending from Wantage into Wiltshire was the scene of this battle, and that the White Horse which is cut out on the slope of the chalk is a memorial of this great victory. The White Horse, which gives its name to the hill, and to the fertile valley beneath, is a most singular object. It is a rude figure, three hundred and seventy-four feet in length, formed by removing the turf, and laying bare the chalk, on the north-west face of this hill, just above a lofty and steep declivity, which is visible from the surrounding country. When the afternoon sun shines upon this side of the ridge, the White Horse may be seen from a great distance—as far, it is said, as fifteen miles. mentions that there was a tradition that lands in the neighbourhood were formerly held by the tenure of cleaning the White Horse, by cutting away the springing turf. An annual festival was once held at this ancient ceremonial labour, called by the people Scouring the Horse. But as the regard for ancient memorials was dying out within the last century, and the peasants of Berkshire were ground down to a worse than serf-like condition of dependence on the poor-rates, the old festival was given up, the White Horse was left to be overgrown and obliterated, and even the memory of Alfred lived no longer amongst his Saxon descendants in these lonely valleys, who had grown up in ignorance and pauperism, because the humanities which had associated their forefathers with their superiors in rank were unwisely severed. The age of festivals, whether of religion or patriotism, is gone. We ought to mention that some antiquaries differ from Dr. Wise, and believe the White Horse to be of earlier origin than the age of Alfred. There can be no question, however, that it is a work of very high antiquity.