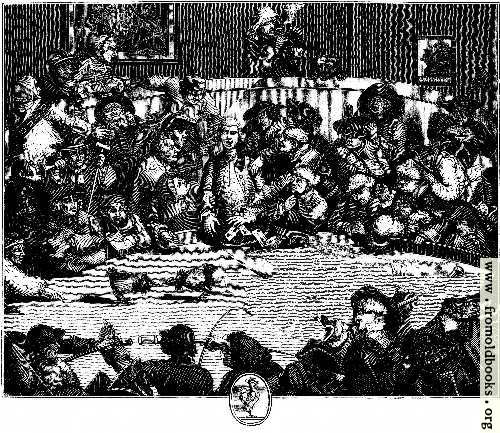 “We may be grateful that the Cockpit (Fig. 2440) does deal with an amusement that no longer exists—there is hardly even a type left of the class to which it belonged, its gambling adjunct of course excepted. Cock-throwing, bear and badger baiting, have disappeared, though the modern sportsman’s battue may be considered as little better: it must be owned there is a great resemblance between that sport and the more ferocious and bloody ones of the last century. And a stranger scene to any but familiar eyes than a cockpit of Hogarth’s time represented it would be difficult to find. There were congregated in it persons from the highest down to the lowest classes of society—peer and sweep were there. “Hail fellow, well met” together. Theignoble lord who is seen in Hogarth’s picture represents Lord Albemarle Bertie, who was totally blind, and yet placed his chief enjoyment in such a scene as this. He is the centre of attraction to most of the reprobates and gamblers who are here collected together; five of them at once are endeavouring to bet with him as to the issue of the combat. Mark, too, the rascal who looks up so furtively at him while abstracting a bank-note from the nobleman’s store: the expression of that thief’s face is truly inimitable.

If blindness could not keep away the devotees of the Cockpit, of course deafness would not; so we see there is an old gentleman present, with an ear-trumpet—and he is lame into the bargain.

The absorbing character of the sport is strikingly expressed in the circumstance, that although one of the spectators has succeeded in getting to the front of the pit, in an unpleasantly sudden manner—no one except the unfortunate person he has crushed takes the slightest notice. Even the peer who sits there, with his star, and spectacles, thinks nothing of his dignity; he knows and is content with the tone and habits of the place. The persons in the foreground are just closing a bet by touching the tips of their whips, across another spectator.

From the actual business of the scene, Hogarth rises as usual to its moral—generally Nature’s own – that of inevitable consequences: the anxiety and alarm expressed on several of the faces—the remorse and anguish of the man who has his hands clasped, and sits next to the thief—the despair and frenzy of the person at the extreme corner of the picture on the right, tell at once of the concomitants of the Cockpit, that one time or another, in a lesser or greater degree, fall upon all who habituate themselves to such enjoyments. The snatches “of thought beyond the reach of art” that are to be found in nearly all Hogarth’s compositions are most happily exemplified here. Our readers will see that there is a shadow thrown across the floor of the pit, which bears the shape of a man in a basket or some such object: it is a defaulter suspended from the roof, such being the custom of the Cockpit when men lose and cannot pay. But he appears to be holding out a watch and seals. We hardly need explain the movement; the ruling passion is as strong as ever, in spite of the degradation of the basket, so the criminal is challenging some one to bet with him for his sole remaining valuable.” (pp. 350, 351)

One commenter says of this picture, “Hogarth depicts a crowd of men from many professions and of all societal ranks reacting fanatically to their fortunes in a game dubbed ‘Royal Sport.’ Selfishly seeking personal wealth, ‘society’ is here presented as corrupt and politically dysfunctional. Hogarth alludes to Leonardo da Vinci’s Last Supper by showing the wealthy and blind Lord Albemarle Bertie as an anti-Christ with his disciples, of whom one ‘Judas’ betrays him by stealing his money.” (Northwestern University’s Hogarth Exhibition)

I am not happy with how this came out. On the other hand, I didn’t find another version of the image that had been explicitly placed into the public domain and that was any better.