2045.—Infantry Armour, 1625 (From a Specimen at Goodrich Court; engraved in Skelton’s Armour)details 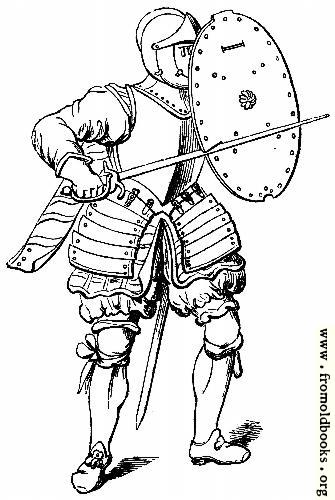 2045.—Infantry Armour, 1625 (From a Specimen at Goodrich Court; engraved in Skelton’s Armour), in England more

2045.—Infantry Armour, 1625 (From a Specimen at Goodrich Court; engraved in Skelton’s Armour)

Armour, on the decline at the close of the last period, continued to be used through the [English] Civil Wars, though it did not exactly justify James I’s characteristic praise—that it not only saved the life of the wearer, but hindered him from doing hurt to anybody else. Many a life was lost, clad in complete steel, or nearly so, and many a life was taken by the heavily armed cavalry soldier. Helmets (Fig. 2050) or head-pieces were invariably worn in the field. Those of the Cavalier (Fig. 2044) and the Cuirassier (Fig. 2048) were in general crowned with plums. The Dragoon (Fig. 2051), whose order was first raised in France in 1600, by the Marshal de Brisac wore in our armies a stout buff coat with deep skirts. Infrantry armour (Fig. 2045) consisted of back and breast pieces, worn over a buff coat, and with throat-pieces and skill-cap, the cheeks being also defended.” (p. 211)