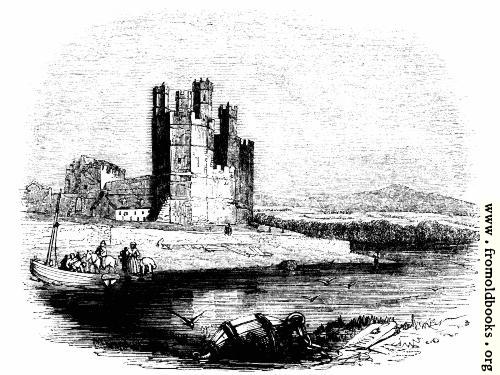 There is another similar but larger engraving of Caernarvon Castle in Woodward’s History of Wales.

[Edward I] proceeded to institute a series of wise regulations to render them [the Welsh] submissive, vicilized, and contented, whilst he flattered their well-known pride y adroitly leading them to indulge the delusive hope that his infant son, born among them in Carnarvon Castle (Fig. 827),should have the seperate government of their country. He strongly fortified the castle just named, as well as Conway Castle (Figs. 829 and 834) and many others,—Beaumaris Castle (Fig. 830) was buillt later in the reign;—and, to finish his conquest, divided the lands at the foot of Snowdon among his great barons, who gave them to others in fief, when the territory soon became studded over with towers and strongholds for defence, and many a savage feud occurred afterwards between these petty feudal tyrants and the natives.” (p. 227)