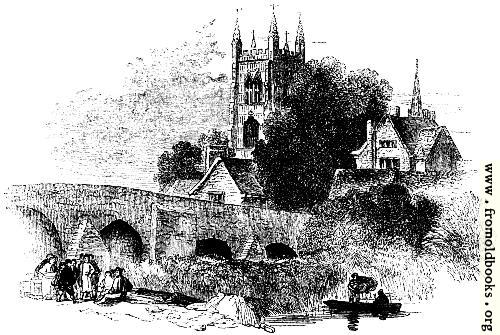 “About two miles and a half from Evesham is an elevated point near the village of Twyford, where the Alcester Road is crossed by another track. The [River] Avon is not more than a mile distant on either hand, for, flowing from Offenham to Evesham (Fig. 819), a distance of about three miles it encircles that town, returning in nearly a parallel direction, about the same distance, to Charlbury.” (p. 219)

Evesham is famous for the Battle of Evesham on the fourth of August, in the year 1265. Simon de Montfort and his knights were killed by Prince Edward. Later, in 1644 during the Civil War, King Charles stayed here.

The picture shows in the foreground a bridge over the River Avon, with two people in a small fishing boat and a group of people sitting on the bank. In the background we see Evesham parish church, a house (probably the Vicarage) and a spire that marks the East end of the church.

The tower in the picture is the Bell Tower - built in around 1547 by Abbot Lichfield - completed just about the time of the dissolution of the monasteries. Evesham Abbey was sold off to businessmen, but the tower was bought by the town’s people.
The spire you can just see in the background is All Saints’ Parish Church.
I have no idea what the houses are.
the picture is somewhat out of scale - the bell Tower is set on a hill in Abbey Park - so should be much more above the level of the river.
The bridge may (or may not - depending on the dating of the picture) be Workman Bridge.

Edward Pillar is correct about the tower being The Bell Tower. He is incorrect about its date. It was built by the last true abbott of Evesham Abbey, Clement Lichfield, who atarted its construction in about 1530. Work on the tower ceased in 1539, when Lichfield was deposed as abbott in favour of a ’puppet abbott’, who was later to hand over the mighty abbey to the King’s soldiers on 30th January 1540. Luckily it was almost finished. It is complete externally, but internally it lacks the stone fan-vaulted ceiling above the archway at its base, the springing for which exists. It stands today the same as it did in 1540, except for a weather vane on each of its four corner turrets and wooden louvres in the bell windows.
The tower has always been completely detached, even in abbey days. There is a rumour that the townspeople paid £100 for it to remain, but this has never been substantiated and it is a fact that it is owned by the parish church. It remains an ecclesiastical building.
The house shown near the bridge is not the vicarage. That was was way back from the bridge, next to the church.
The bridge shown in the engraving is the old Evesham Bridge, built by the monks of Evesham Abbey. This bridge was replaced by the current bridge, the Workman Bridge, which was opened in 1856.