237.—Saxon Emblems of the Month of April.details 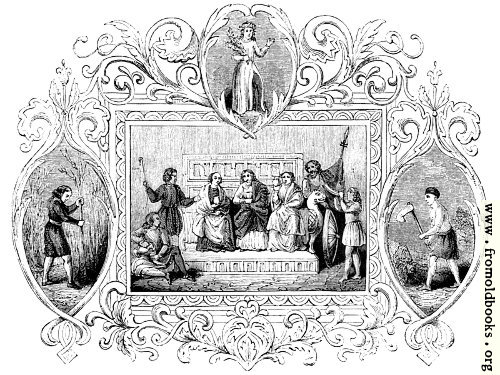 237.—Saxon Emblems of the Month of April. more

237.—Saxon Emblems of the Month of April.

The illumination of the Saxon Calendar for this month represents three persons elevated on a sort of throne, each with drinking-cups in their hands, and surrounded with attendants upon their festivities (Figs. 237, 267). Strutt, in his description of this drawing, says, “Now, taking leave of the laborious husbandman, we see the nobleman regaling with his friends, and passing this pleasant month in banquetings and music.” But he assigns no cause for the appropriateness of this jollity to the particular season. Is not this picture an emblem of the gladness with which the great festival of Easter was held after the self-denials of Lent? April was called by the Anglo-Saxons “by the name of Oster-monat; some think, of a goddess called Goster, whereof I see no great reason, for if it took appellation of such a goddess (a supposed causer of the easterly winds), it seemeth to have been somewhat by some miswritten, and should rightly be Oster, and not Goster. The winds indeed, by ancient observation, were found in this month most commonly to blow from the east, and east in the Teutonic is Ost, and Ost-End, which rightly, in English is East-End, hath that name for the eastern situation thereof, as to the ships it appeareth which through the narrow seas do come from the west. So as our name of the feast of Easter may be as much to say as the feast of Oster, being yet at this present in Saxony called Ostern, which cometh of Oster-monat, their and our old name of April.” Those who are banqueting on the dais in the illumination, have each cups in their hands; the man sitting at their feet is filling a horn from a tankard; the young man on the right is drinking from a horn. There is a clear distinction between the rank of the persons assembled at this festivity; and the difference of the vessels which they are using for their potations might imply that the horns were filled with the old Saxon ale or mead, and the cups with the more luxurious wine. In Alfric’s Colloquy a lad is asked what he drank; and he answers, “Ale if I have it, or water if I have not.” He is further asked why he does not drink wine, and he replies, “I am not so rich that I can buy me wine, and wine is not the drink of children or the weak-minded, but of the elders and the wise.” But if we may reason from analogy, the drinking-horn had a greater importance attached to it than the drinking-cup. Inheritances of land were transferred by the transfer of a horn; estates were held in fee by a horn. The horn of Ulphus (Fig. 292) is a remarkable curiosity still preserved in the Sacristy of the Cathedral at York. was a Danish nobleman of the time of , who, as informs us, “By reason of the difference which was like to rise between his sons about the sharing of his lands and lordships after his death, resolved to make them all alike; and thereupon coming to York with that horn wherewith he was used to drink, filled it with wine, and kneeling devoutly before the altar of God and St. Peter, prince of the apostles, drank the wine, and by that ceremony enfeoffed this church with all his lands and revenues.” During the Civil Wars the horn of Ulphus came into the possession of Lord Fairfax, after being sold to a goldsmith; and it was subsequently restored to the church by the Fairfax family in 1675. The Pusey family in Berkshire hold their possessions by a horn given to their ancestors by King Canute (Fig. 290). So Camden informs us; though the inscription upon the horn which records the fact (Fig. 291) is held by Camden’s editor, Bishop Gibson, to be of a much more recent date. Nearly all the Saxon representations of convivial meetings—and these are sufficiently numerous to furnish pretty clear evidence of the hospitality of that age—exhibit the guests for the most part drinking from horns (Fig. 249). Whether the wine or mead were drunk from horn or cup, the early custom of pledging appears to have been universal (Fig. 265). According to the old chroniclers, it was the first wine-pledge that delivered over Britain to the power of the Saxons, when the beautiful Rowena sat down in the banqueting-hall by the side of Vortigern, and betrayed him by her wine-cup and her Waes Heal (Be of health). Robert of Glocester has recorded this first wassail in his rough rhyme, which has been thus paraphrased:

‘Health,’ cried the Chieftain to the Saxon maid;

Then gaily rose, and, ’mid the concourse wide,

Kiss’d her hale lips, and plac’d her by his side.

At the soft scene such gentle thoughts abound,

That healths and kisses ’mongst the guests went round:

From this the social custom took its rise;

We still retain and still must keep the prize.”

Selden, who gives the story in his Notes to Drayton, conjectures of the wassail of the English that it was “an unusual ceremony among the Saxons before Hengist, as a note of health-wishing (and so perhaps you might make it wish-heil), which was expressed among other nations in that form of drinking to the health of their mistresses and friends.” (p. 69)

The farmer on the right appears to be bare-chested; the boy with the horn is either bare-footed or wearing stockings (hose, or thigh-length socks). So maybe it was a warm April. The book says the boy is drinking from the horn, although he could equally well be blowing into it I suppose.