83.—Julias Cæsar. From a Copper Coin in the British Museum.details 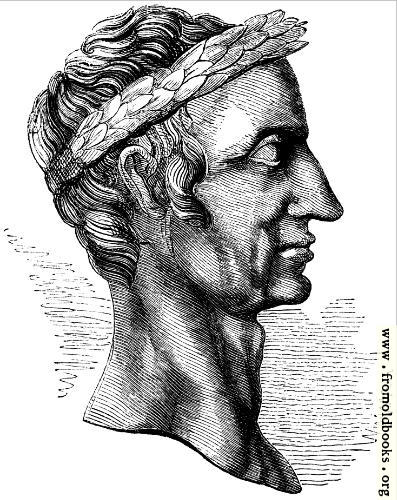 83.—Julias Cæsar. From a Copper Coin in the British Museum. more

83.—Julias Cæsar. From a Copper Coin in the British Museum.

In the latter part of the summer of the year 55 B. C. (Halley, the astronomer, has gone far to prove that the exact day was the 26th of August), a Roman fleet crossed the Channel, bearing the infantry of two legions, about ten thousand men. This army was collected at the Portus Itius (Witsand), between Calais and Boulogne. Eighty galleys (Fig. 86) bore the invaders across the narrow seas. As they neared the white cliffs, which frowned upon their enterprise (Figs. 87, 88, 90), Cæsar beheld them covered with armed natives, ready to dispute his landing. The laurelled conqueror (Figs. 83, 84), who, according to Suetonius, only experienced three reverses during nine years’ command in Gaul, would not risk the Roman discipline against the British courage, on a coast thus girt with natural defences. It is held that the proper interpretation of his own narrative is, that he proceeded towards the north; and it is considered by most authorities that the flat beach between Walmer Castle and Sandwich was the place of his disembarkation. It was here, then, that the British and Roman weapons first came into conflict (Fig. 80). (p. 26)