51.—Plan and Section of Chun Castledetails 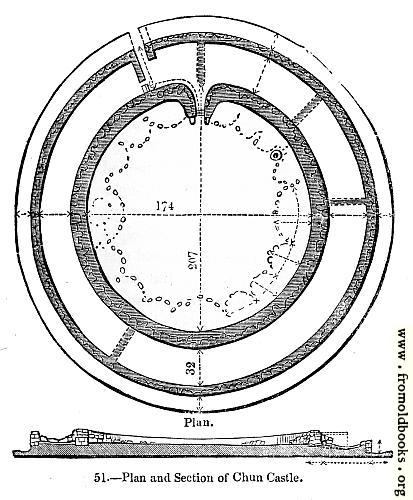 51.—Plan and Section of Chun Castle

Chûn Castle is in West Penwith, Cornwall; it was built about 2,500 years ago. Remains of tin smelting have been found there, strengthening the suggestions that tin mining was active in Cornwall in at least the 1st Century AD and probably earlier.

stonepages.com page for the castle with a picture. It sounds like there was more left in 1845 when the following extract from an older book was printed:

“It consists of two circular walls, having a terrace thirty feet [approx. 10 metres] between (Fig. 51). The walls are built of rouch masses of granite of various sizes, some five or six feet long, fitted together, and piled up without cement, but presenting a regular and tolerably smooth surface on the outside. The outer wall was surrounded by a ditch nineteen feet in width [approx. 6m]: part of this wall in one place is ten feet high, and about five feet thick. Borlase is of [the] opinion that the inner wall must have been at least fifteen fet high; it is about twelve feet thick. The only entrance was towards the south-west, and exhibits in its arrangement a surprising degree of skill and military knowledge for the time at which it is supposed to have been constructed. It is six feet wide in the narrowest part, and sixteen in the widest, where the walls diverge, and are rounded off on either side. There also appear indications of steps up to the level of the area within the castle, and the remains of a wall which, crossing the terrace from the outer wall, divided the entrance at its two parts at its widest end. The inner wall of the castle incloses [sic] an area measuring one hundred and seventy-five feet north and south, by one hundred and eighty feet east and west. The centre is without any indication of buildings; but all around, and next to the wall, are the remains of circular inclosures, supposed to have formed the habitable parts of the castle. They are generally about eighteen of twenty feet in diameter, but at the northern side there is a larger apartment thirty by twenty.” (pp 19, 22, attributed to ‘Pictorial History of England’).