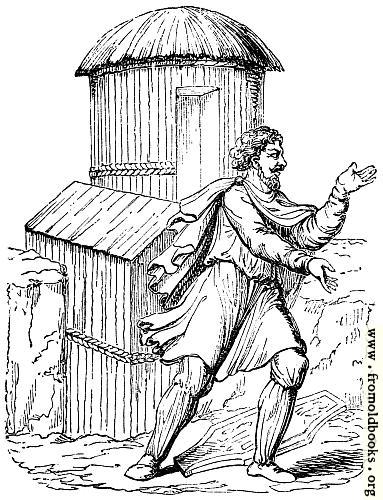 “In the neighbourhood of Llandaff were, in King’s time, several modern pig-sties, of a peculiar construction; and he held that the form of these was derived from the dwellings of the ancient Britons. (Fig. 55.) This form certainly agrees with the description which Strabo gives of the houses of the Gauls, which he says were constructed of poles and wattled work, of a circular form, and with a lofty tapering roof. On the Antonine column we have representations of the Gauls and the Gaulish houses, but here the roofs are for the most part with domes (Fig. 50). Strabo further says, “The forests of the Britons are their cities; for, when they have enclosed a very large circuit with felled trees, they build within it houses for themselves and hovels for their cattle. These buildings are very slight, and not designed for long duration.” Cæsar says, “What the Britons call a town is a tract of woody country, surrounded by a vallum and a ditch, for the security of themselves and cattle against the incursions of their enemies.” The towns within woods were thus fortresses; and here the Druidical worship in the broad glades, surrounded by mighty oaks which were their natural antiquities, was cultivated amidst knots of men, held together by common wants as regarded the present life, and common hopes with reference to the future (Fig. 56). A single bank and ditch, agreeing with Cæsar’s description, is found in several parts of the island. There is such an entrenchment in the parish of Cellan, Cardiganshire, called Caer Morus.” (p. 11)