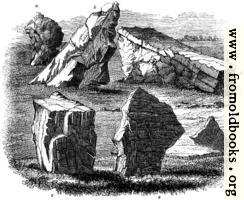 Stanton Drew stone circles lie on private land today, so you need permission to visit them [but see comments below]. The Great Circle is one of the largest megalithic stone circles in England. The date from the late Neolithic or early Bronze age (3000 – 2000BC).

About seven miles south of Bristol is a small parish called Stanton Drew. The name is held to mean the Stone Town of the Druids. Stukeley was of opinion that the Druidical monument at this place was more ancient than Abury. The temple is held to have consisted of three circles, a large central circle, and two smaller ones. Of the larger circle five stones are still remaining; and of the smaller ones still more. Stanton Drew was described in 1718, by Dr. Musgrave, and afterwards by Stukeley. The stones had suffered great dilapidation in their time; and the process of breaking them up for roads has since gone forward with uninterrupted diligence. They are very rude in their forms, as will be seen by reference to the engraving (Fig. 34.) That marked a is singular in its rugged-ness. The stone b inclines towards the north, and its present position is supposed to be its original one: in its general appearance of bending forward, it is not unlike the single stone in the avenue at Stonehenge. The stone c differs greatly from the others, in being square and massive. The largest stone, d, is prostrate; it is fifteen feet and a half in length. The engraving represents not the circular arrangement, but remarkable separate stones, of which e is at a considerable distance from either of the circles. The largest stones are much inferior in their dimensions to those at Stonehenge and Abury. The smaller ones lie scattered about at very irregular distances; and it certainly requires a great deal of antiquarian faith to find the circles which are traced with such infallible certainty by early and recent writers. It is very different with Abury and Stonehenge. The country people have their own traditions about these remains. They call them “the wedding;” holding that, as a bride and bridegroom were proceeding to their espousals, surrounded by pipers and dancers, the whole party, for what crime we are not informed, were suddenly turned into stone. The theories of the learned are in some matters almost as difficult to be received as the traditions of the vulgar. King says of the remains of Stanton Drew, “There are stones cautiously placed nearly on each side of the meridian, two at the one end for a sort of observer’s index, and two at the other as if designed for leading sites to direct the eye to certain points in the heavens, equally distant, a little to the east and west of the south: and so in like manner, two to the east, and one on the west side for an index, as if to observe the rising of certain stars and planets.” Superstition, we apprehend, settles these matters much more easily than science. There were formerly three huge upright stones near Kennet, not far from Abury, which Dr. Plot held to be British deities. The country people had a readier explanation of their use; for they called them, from time immemorial, “the Devil’s Coits.” They could be playthings, it might be readily imagined, for no other busy idler. But the good folks of Somersetshire, by a sort of refinement of such hackneyed traditions, hold that a great stone near Stanton Drew, now called ‘Hackell’s Coit,’ and which formerly weighed thirty tons, was thrown from a hill about a mile off by a mortal champion, Sir John Hautville. It is remarkable, though perhaps natural, that there is generally some superstitious notion associated with these monuments of a dim antiquity. We shall have presently to speak of the singular erection near Maidstone, called Kit’s Coty House. Near this supposed cromlech are some large stones, scattered about a ploughed field. A coachman, who was duly impressed with the claims of Kit’s Coty House to notice, told us, as the climax of the extraordinary things connected with it, that no one had ever been able to count the stones in that field, so that it was impossible to say what was their exact number. In the neighbourhood of Stanton Drew, they have a variation of this belief which does not go quite so far. They simply hold that it is wicked to attempt to count the stones.” (p. 11)

English Heritage has a useful Web page about the site.

Stanton Drew is near Bristol, in Somerset.

Your comment on the stones at Stanton drew says they are on private land and you need permission to visit. There is an honesty box at the gate with a suggested donation of £1 for which you get a simple guide leaflet.