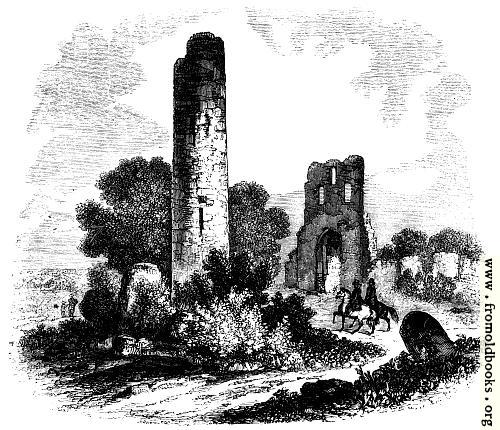 35.—Round Tower of Donoughmore.

It is easy to understand how the same religion prevailing in neighbouring countries might produce monuments of a similar character; but we find the same in the far east, in lands separated from ours by pathless deserts and wide seas. So it is with those remarkable structures, the Round Towers of Ireland; which were considered ancient even in the twelfth century. Many of these towers are still perfect. They are varied in their construction, and their height is very different; but they all agree in their general external appearance, tapering from the base to a conical cap or roof, which forms the summit. They are almost invarariably found close to an ancient Christian church; which is accounted for by the fact, that the sites of pagan worship were usually chosen by the early missionaries for rearing a holier structure, which should reclaim the people from their superstitious reverence, to found that reverence upon the truths which were purifying the lands of classic paganism. The Round Tower of Donoughmore (Fig. 35) is one of these singular monuments. “The only structures that have been anywhere found similar to the Irish Round Towers are in certain countries of the remote east, and especially in India and Persia. This would seem to indicate a connexion between these countries and Ireland, the probability of which, it has been attempted to show, is corroborated by many other coincidences of language, of religion, and of customs, as well as by the voice of tradition, and the light, though faint and scattered, which is thrown upon the subject by the records of history. The period of the first civilization of Ireland then would, under this view, be placed in the same early age of the world which appears to have witnessed, in those oriental countries, a highly advanced condition of the arts and sciences, as well as flourishing institutions of religious and civil polity, which have also, in a similar manner, decayed and passed away.” (‘Pictorial History of England.’) The same reasoning may be applied to the Druidical circles, of which the resemblances are as striking, in countries far removed from any knowledge of the customs of aboriginal Britons.” (p. 11)