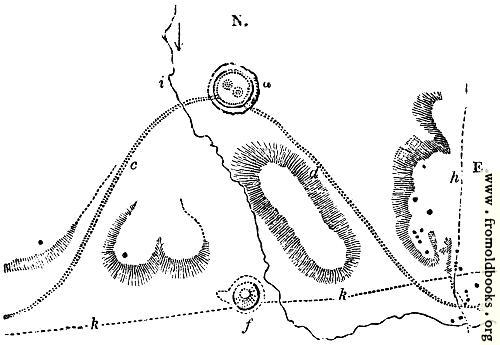 A map covering a larger area than that of Fig. 26.

The general view (Fig. 25) is a restoration formed upon the plan (Fig. 26). Upon that plan there are two openings through the bank and ditch, a and b. These are connected with a peculiarity of Abury, such as is found in no other monument of those called Celtic, although near Penrith a long avenue of granite stones formerly existed. At these entrances two lines of upright stones branched off, each extending for more than a mile. These avenues are exhibited in the plan (Fig. 27). That running to the south, and south-east d, from the great temple a, terminated at e, in an elliptical range of upright stones. It consisted, according to Stukeley, of two hundred stones. The oval thus terminating this avenue was placed on a hill called the Hakpen, or Overtoil Hill. Crossing this is an old British track-way h. Barrows, dotted on the plan, are scattered all around. The western avenue c, extending nearly a mile and a half towards Beckhampton, consisted also of about two hundred stones, terminating in a single stone. It has been held that these avenues, running in curved lines, are emblematic of the serpent-worship, one of the most primitive and widely extended superstitions of the human race. Conjoined with this worship was the worship of the sun, according to those who hold that the whole construction of Abury was emblematic of the idolatry of primitive Druidism. The high ground to the south of Abury within the avenues is indicated upon the plan (Fig. 27). Upon that plan is also marked f, a most remarkable monument of the British period, Silbury Hill; of which Sir R. Hoare says, “There can be no doubt it was one of the component parts of the grand temple at Abury, not a sepulchral mound raised over the bones and ashes of a king or arch-druid. Its situation, opposite to the temple, and nearly in the centre between the two avenues, seems in some degree to warrant this supposition.” The Roman road k from Bath to London passes close under Silbury Hill, diverging from the usual straight line, instead of being cut through this colossal mound. The bird’s-eye view (Fig. 28), exhibits the restoration of Abury and its neighbourhood somewhat more clearly. 1 is the circumvallated bank, 2 and 3 the inner temples, 4 the river Kennet, 5 and 6 the avenues, 7 Silbury Hill, 8 a large barrow, 9 a cromlech.” (p. 10)