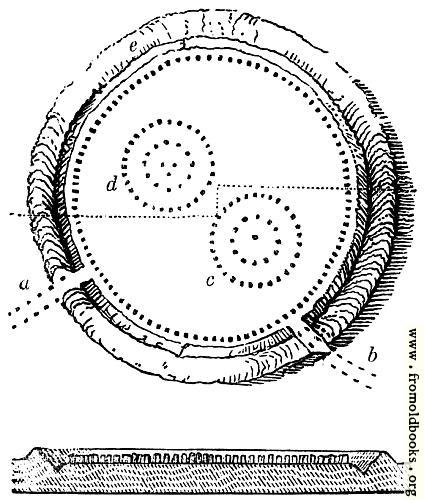 The plan exhibits this bank, e, with the ditch f: immediately within the ditch was a circle of stones, dotted on the plan. This circle is stated to have been composed of a hundred stones, many from fifteen to seventeen feet [approx. five or six metres] in height, but some much smaller, and others considerably higher, of vast breadth, in some cases equal to the height. The distance between each stone was about twenty-seven feet [approx seven metres]. The circle of stones was about thirteen hundred feet in diameter. The inner slope of the bank measured eighty feet. Its circumference at the top is stated by Sir Richard Hoare to be four thousand four hundred and forty-two feet. The area thus enclosed exceeds twenty-eight acres. Half-way up the bank was a sort of terrace walk of great breadth.

“Dimensions suc as these at once impress us with notions of vastness and magnificence. But they approach to sublimity when we imagine a mighty population standing on this immense circular terrace and looking with awe and reverence upon the religious and judicial rites that were performed within the area. [We might as well imagine children bathing in custard: there is no evidence of ‘awe and reverence’ of course – Liam] The Roman amphitheatres are petty things compared with the enormous circle of Abury [Avebury].

Looking over the hundred columns, the spectators would see, within, two other circular temples, marked c and d [on the plan]: of the more northerly of these double circles some stones of immense size are still standing. The great central stone of c, more than twenty feed high, was standing in 1713. In 1720 enough remained decidedly to show their original formation. The general view (Fig. 25) is a restoration formed upon the plan (Fig. 26). Upon that plan there are two openings through the bank and ditch, a and b. These are connected with a peculiarity of Abury, such as is found in no other monument of those called Celtic, although near Penrith a long avenue of granite stones formerly existed. At these entrances two lines of upright stones branched off, each extending for more than a mile. These avenues are exhibited in the plan (Fig. 27).” (p. 10)