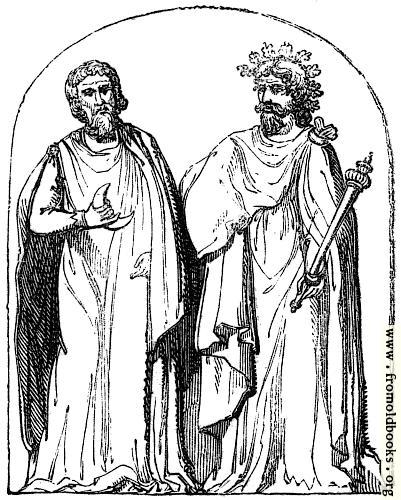 This carved likeness was found in an earth burial-mound, a barrow.

These remarkable monuments contain not only the bones and the ashes of the dead, but various articles of utility and ornament, domestic utensils, weapons of war, decorations of the person, perhaps insignia of honour (Figs. 13 and 14), the things which contributed to comfort, to security, and to the graces of life (Fig. 24). Mela says that the Druidical belief in a future state led the people to bury with the dead things useful to the living. The contents of these barrows inidcate different stages of the arts. In some there are spear-heads and arrow-heads of flint and bone (Fig. 16); in others brass and iron are employed for the same weapons.”

[note: I believe the term brass was sometimes used interchangeably for bronze in the 18th and 19th Centuries – Liam]

“In some the earthen vessels are rudely fashioned, and appear to have been dried in the sun; in others they are of a regular form, as if produced by the lathe, are baked, and ornamented. But, whatever be the difference in the comparative antiquity of these barrows, it is a remarkable fact that in those of South Wiltshire, which have nearly all been explored, nothing whatever has been disovered which could indicate that this mode of cepulture was practised after the Roman dominion had commenced in Britain. The coins of the conquerors of the world are not here to be looked for.” (p. 10)

There are claims of links between Autun in the South of France and Avebury.