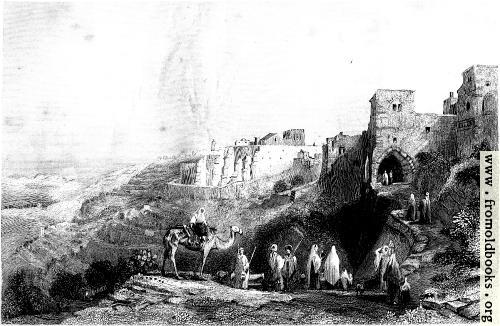 Bethlehem, the birth-place of David and our Saviour Jesus Christ, is a village in Palestine, a part of Syria, in the Pachalic of Damascus, five miles from Jerusalem, at the foot of a hill covered with vines and olive trees, which, however, is not the mount of Olives mentioned in the Bible. An aqueduct conveys water from the hill to the village. It has 300 houses and 2,400 Greek and Armenian inhabitants, who make wooden rosaries and crucifies, inlaid with mother of pearl, for pilgrims; also excellent white wine. In a rich grotto, furnished with silver and crystal lamps, under the choir of a church of a convent in this village, a trough of marble is shown, which is said to be the manger in which Jesus was laid after his birth. There are three convents there for Catholics, Greeks, and Armenians. The greatest ornament of the place is the stately church erected by the empress Helena over the place where Christ is said to have been born, and bearing her name. It is built in the form of a cross, and the top commands a fine view of the surrounding country.” (p. 312)

The picture shows a group of people including a camel rider, and together with some goats and sheep, going along a mountain path towards an arched stone gateway in the outer wall of the city.