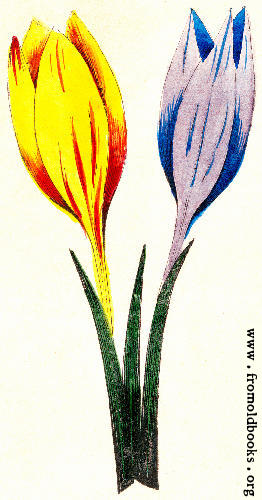 “Dainty young thing
Of life! thou venturous flower,
Who growest through the hard, cold bower
Of wintry spring

Thy fancied bride,
The delicate Snow-drop, keeps
Her home with thee,
Near thy true side.

Will man but hear!
A simple flower can tell
What beauties in his mind should dwell
Through passion’s sphere.” ” (p. 314)

The text in the book continues as follows:

Specific Character. —Petals three: stamens three, arising from the base of the sepals: root tuberous, —perennial.

Geography. —A native of the east, but now found growing wild in England and other temperate parts of Europe; cultivated in our gardens for ornament.

Properties —According to Lindley, the Crocus is more remarkable for its beautiful flowers than for its utility. The substance called saffron is the dried stigmas of the Crocus sativus. Its coloring ingredient is a peculiar principle, remarkable for being totally destroyed by the solar rays—of coloring, in small quantity, a large body of water, and of forming blue and green tints when treated with sulphuric and nitric acid, or with sulphate of iron. Saffron has a very pleasant, aromatic smell, and a fine, aromatic bitter taste. When chewed, it immediately imparts a deep yellow color to the saliva. It was formerly thought to possess remarkably exhilerating qualities, and in large doses was said to occasion immoderate mirth, involuntary laughter, and the ill effects which follow from the abuse of spirituous liquors. Recent experiments, however, have proved these assertions to be without foundation, so that the rank it once held in the Materia Medica is greatly diminished.

Remarks. —Crocus is from Κροκος, saffron. The story of the beautiful youth, Crocus, may be seen in the fourth book of Ovid’s Metamorphoses. He became enamored of the nymph Smilax, and was changed into this flower on account of the impatience of his love, and Smilax was metamorphosed into a yew-tree. Some derive the name from κροκη or κροκις, a thread; whence the stamens of flowers are called κροκιδες. Others, again, derive it from Coriscus, a city and mountain of Cilicia, and others still from the Chaldee, crokin. Its specific name, vernus, alludes to the season of its blossoming. It is a very beautiful flower, appearing in March and April, just as the Snow-drop begins to decline. Yellow, blue or purple, and white, are supposed to be the different colors it originally possessed, but the florist has produced about fifty varieties, which exhibit almost as great a number of hues. It may be made to blossom in the green-house or parlor, as well as the Narcissus, Jonquil, &c. “It is a remarkable circumstance of the Crocus, that it keeps its petals expanded during tolerably bright candle or lamp light, in the same manner as it does during the light of the sun. If the candle be removed, the Crocus closes its petals, as it does in a garden when a cloud obscures the sun; and when the artificial light is restored, they open again, as they do with the return of the direct solar rays.” *

This sentiment is very beautifully expressed in the following lines by Miss Hannah F. Gould, entitled “The Crocus’ Soliloquy:”

Down in my solitude, under the snow,
Where nothing cheering can reach me;
Here, without light to see how to grow,
I’ll trust to nature to teach me.

I will not despair, nor be idle, nor frown,
Locked in so gloomy a dwelling;
My leaves shall run up and my roots shall run down
While the bud in my bosom is swelling.

Soon as the frost will get out of my bed,
From this cold dungeon to free me,
I will peer up with my little bright head;
All will be joyful to see me.

Gaily arrayed in my yellow and green,
When to their view I have risen,
Will they not wonder how one so serene
Came from so dismal a prison?

Many, perhaps, from so simple a flower,
This little lesson may borrow—
Patient to-day, through its gloomiest hour,
We come out the brighter to-morrow!