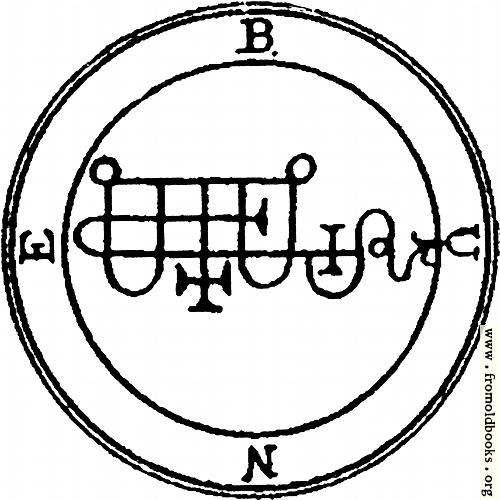 (26.) Bune or Bine. — The Twenty-sixth Spirit is Bune. He is a Strong, Great and Mighty Duke. He appeareth in the form of a Dragon with three heads, one like a Dog, one like a Gryphon, and one like a Man. He speaketh with a high and comely Voice. He changeth the Place of the Dead, and causeth the Spirits which be under him to gather together upon your Sepulchres. He giveth Riches unto a Man, and maketh him Wise and Eloquent. He giveth true Answers unto Demands. And he governeth 30 Legions of Spirits. His Seal is this, unto the which he oweth Obedience. He hath another Seal or character which is made thus; you may use which you will; but the first is the best as Salomon saith.