The Church of St. Giles from the Lawnmarketdetails 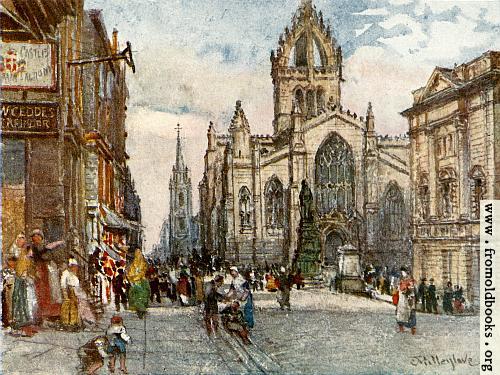 The Church of St. Giles from the Lawnmarket, in Edinburgh, Lothian, Scotland more

The status of the Duke of Buccleuch shows immediately under the tower of the Cathedral, backed by the modernised west end of the building. Farther down the High Street, to the east, is the Tron Church, while to the right of the picture is a portion of the new County Hall. On the extreme left is the entrance from Lawnmarket to Baxter’s Close, where Burns once lodged. (See “Lady Stair’s Close”.)” (p. 47)

St. Giles’ Cathedral is today the High Kirk of the Church of Scotland and is situated on the High Street in the Royal Mile. It was dedicated to St. Giles on the 6th of October 1243, in the reign of Alexander II. by David de Bernham, Norman Bishop of St. Andrews. The book does not mention that the name (popular in France) was chosen in support of the Auld Alliance of Scotland with France against England!

This is a busy street scene probably from 1904 painted in watercolour by John Fulleylove, presumably in the summer by the bright light, blue sky, and the barefooted children playing in the left foreground. Some of the original watercolours were listed at Guilding’s in 2001 but I think not sold.