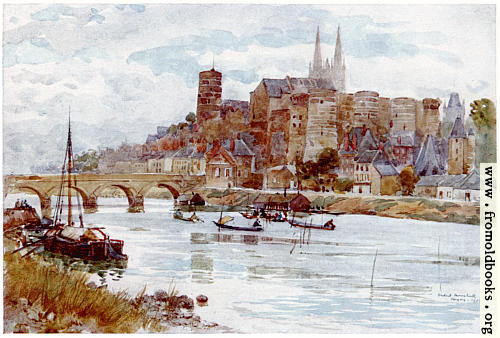 “The French yearning to make everything new” has done its work in Angers, but through Fulk, Geoffrey, René, and the rest would be at a loss to recognise their old capital in the trim modern town, enough remains to show us what has been. No city standing as Angers does on rising ground above a wide river, with a mass of castle bastions sloping up the hill, could fail to have made history in its day. The modern town may be disposed of in a few words —it is clean and full of life, and altogether very far removed from the “black Angers” known to our ancestors. This mediæval and grm-sounding title, reminiscent of dungeons and tyrant princes, probably either meant that the ancient town was closely and squalidly built, or else referred to the dark slate with which the country abounds, and which might well have been used for buildig purposes all over the town, as we will see it in some houses by the river.

The attractive side of Angers is that facing the water, and the river is quite worthy of the town on its banks, though Mr. Henry James does censure the “perversity in a town lying near a great river, and yetnot upon it.” It is true that Angers has not got as far as the Loire; but it has what is next best, a tributary of the great river—a wide placid flow, which makes no mean show here, spanned as it is by three fine bridges. Looking upstream from the lowest bridge one sees the old and the new together; the clean well-to-do water-front, pleasant boulevards, and a bright little quay with every house the pattern of its neighbour; and above this the black mass od the castle, whose solid hugeness makes the crowning towers of Saint Maurice look as if they were cut out of paper, so delicately and sharply defined are they against the sky. Down river there is a long and sunny path, broad green meadows and a stretch of country beyond, and little fishing boats dotted about on the water.

Freeman declares the city of Angers to be the headquarters of the Angevin style of architecture, and quotes as a noticeable example of that style the Cathedral of St. Maurice, which differs at least as widely from that of the French churches as from that of Normandy.