S. Peter’s and Castel Sant’ Angelo From the Tiberdetails 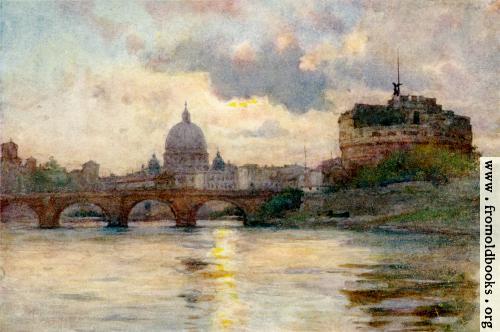 S. Peter’s and Castel Sant’ Angelo From the Tiber, in Rome, Italy more

S. Peter’s and Castel Sant’ Angelo From the Tiber

A painting showing St Peter’s Basilica and Saint Angelo’s Castle from the river Tiber, at sunset. There is also a version of this image cropped for use as a computer desktop background, or wallpaper image. The tissue paper covering the plate bears the caption and also refers to pages 16, 32, 239, 242; I have transcribed the relevent passages as follows:

The tract of the city which we see from the terrace on the Pincian hill, looking towards the Janiculum, has been called the most historic plot of land in the world Is it without reason that the furthest point of this unequalled panorama is the dome which Michael Angelo erected over the tomb of S. Peter?” (p. 16)

“The only fragments left of the work of Hadrian are the ruins of a villa near Tivoli, the mausoleum and Pons Aelius, now the castle and bridge of S. Angelo; and behind the church of S. Francesca Romana in the Forum and the ruins of the Templum Urbis, the temple of Venus and Rome, with its twin niches for the gods, one turned toward the convent the other looking out towards the Colesseum. The gilt bronze tiles from the roof of this temple were removed by Pope Honorius I. to deck the Christian Templum Urbis S. Peter’s.” (p. 32)

“There is a covered way from the Vatican to Castel Sant’ Angelo which is itself a parable of the history of the Roman popes. It was constructed as a means of fleeing in secrecy and safety from the Vatican when the turbulent Romans or foreign invaders made the pope’s life insecure and placed his city at the mercy of vandals. The “Pope’s own city of Rome” should never be thought of without a mental picture of the covered passage from the episcopal palace to the fortified castle, along which popes young and old, bad and good, have hurried praying or cursing.” (p. 239)

“That mute but eloquent parable in stone is the real synthesis of the history of the papacy—the episcopal palace by the tomb of the Apostle, in the first Christian church, at one end, and at the other the fortress which was once a pagan emperor’s mausoleum, with its dungeons and its history, secret and open, of crime and bloodshed; and between these the covered way along which the popes pass and repass from one to the other, symbol not of the separation but of the fateful conjunction of spiritual and temporal which has haunted their history.” (p. 242)